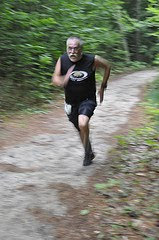 The Bradbury Scuffle course and I met face to face yesterday. We squared off like two fighters in a prize fight. Problem is I got the crap kicked out of me. I was not ready for the challenge and actually I knew it but thought my determination would carry me through.

Contrary to my normal start, which is usually conservative, my intent was to push hard on the first mile and see how long I could maintain the pace. I decided to make myself work and see if I could dig deep enough to pull off a decent time.

As it turned out, I had a pretty good 5K race in me. I threw my estimated 9:30 pace out the window and banged out an 8:25 first mile. Even though miles two and three were said to be the toughest on the course (other than the last 1/2 mile hill), I did pretty darn good on two with a 8:52.

Mile three is when I started feeling the accumulative effect of the humidity, the difficulty of the terrain and of course my lack of training. The first big punch came from the hill in mile three…..even though I told myself before the race I would not walk at all, I just plain ran out of oxygen and reluctantly had to slow to a walk on that hill.

A lot of runners passed me at this point and that was the two part of the one two punch. Hey, it was only a 6 mile race and I was falling apart at 3 miles? I started questioning my motives for starting out fast. Not only that, but my heart rate monitor was not working and other than feeling like I was at the end of my zone, I had no idea where I was at.

I honestly thought about stopping but reminded myself that I planned this and should expect a physical breakdown of sorts. Not only that but as a rule of thumb, one never makes a quiting decision while going uphill. It is funny how fast we tend to cave when adversity hits us.

I felt a bit better after cresting and ran pretty good until the hill at 3.5 miles. This one wasn’t quite as bad on me psychologically because I knew the water stop was at the top and I would have the chance to dump some on my head to cool down.

The rest of mile four and most of five felt pretty good, even though I was running slower, at least I was moving forward. Of course a big part of this was downhill snowmobile trail and that helped a lot.

Mile six totally sucked, I had no fight left in me and the course was slamming me at will. I had to force my legs to keep running and was discouraged when I realized how slow my time would be. To help, I kept my focus on the guy in front of me and tried to reel him in enough to allow a finishing kick strong enough to pass him.

At about 1/4 mile to the finish, I started my kick and it actually felt great. I am not sure where the energy or speed came from but it was surely the best part of the race for me. I thought I passed the guy but we ended up stepping across the line at exactly the same time (according to the timers).

In the fight game, they say you sometimes learn more when losing a fight than winning and I believe that happened here. Yeah, I got the crap kicked out of me, but I planned it that way and I can honestly say I learned some valuable things.

Now that the whining and complaining is over, I again have to commend Ian and crew for a fantastic race. They did an excellent job (as usual) to bring us a well organized race and I especially liked the flags lined in such a way as to convince all runners to trudge strait through the puddles. I actually thought about dunking my head into the big one but worried about getting run over.

My son, running his first Scuffle, had little trouble showing the course who was boss and pulled off a fantastic time. I wish I could say he learned it from me, but he didn’t. The fact that we have the same name probably confused a few and created some ohhs and ahhs when they thought I ran so well. I can only dream of a time that fast.