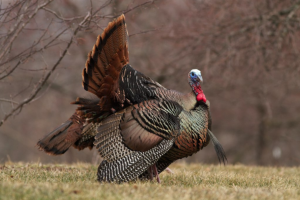 The regular season for turkey hunting opens on Monday, May 2nd. It lasts until June 4th. Times are a half an hour before sunrise and a half an hour after sunset. Turkey hunting used to end at noon up until a few years ago, but MIF&W made it a full day due to our quickly increasing turkey population. And of course, no hunting on Sundays.

Generally, runners and others aren’t at nearly as much of a risk as they are during deer season. Turkey hunting is almost exclusively performed with shotguns and bows, which have far less range than rifles.

Turkeys are called into close range before they are harvested and there is far less chance of you being mistaken for a bird, even if you were running around with feathers sticking out of your butt. Additionally, there are considerably less turkey hunters than deer hunters.

In short, there’s no need to avoid most trails like there is during deer season, but be aware that we are sharing the woods with hunters who are dressed in full cammo (turkeys have excellent eyesight). And obviously, guns (and bows) are still dangerous.

It’s common for turkey hunters to hunt on the edges where woods meet fields or open areas, but they could be in more forested areas as well.

The majority of hunters are ethical and quite friendly, but a few are jerks and like to break the rules. If you see anyone doing something you think they shouldn’t, don’t hesitate to call the game wardens for guidance. Their number for our region is (207) 657-2345.