Big Fun at the Bradbury Breaker:  A Race Report

Before I weave my own tale, I’d be remiss to not give a big thanks right off the bat to Ian and his sidekick Ryan for putting on one hell of an event. Ian’s passion for trail running is a driving force for the several successful races he puts on. Maine is damn lucky to have him. This race was, like all the others, was big fun.


And check out the t-shirt that Ian designed, which is the best I have ever seen of any race, anywhere: 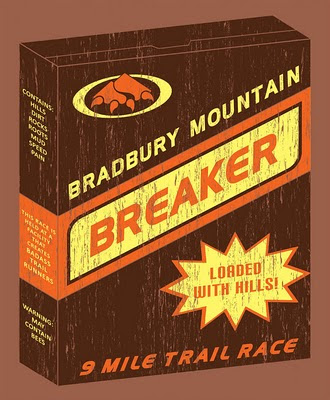 Race strategy for the Bradbury Breaker 9-mile Trail Race: start conservative, end faster. Whenever I’ve been disciplined enough to do this in the past, it’s always boded well, especially in marathons and ultras. Whenever I’ve done the opposite (which should be re-worded to “start fast, blow engine and struggle to the finish line if you even make it there”), it’s sucked royally.

I executed the strategy well today (the first strategy), deciding pretty much last minute this was how I was going to run it. The only caveat is that I think I could have pressed a little harder there in the beginning and gotten a slightly faster time. Probably not by much though. But as a result, I had a blast and felt very comfortable and sincerely had a lot of fun throughout the race.

0-3 Miles
The race started and we were off. I started about four or five rows back, and in the first quarter of a mile I let quite a few pass me with no worries. I was concerned beforehand about it being crowded at the beginning, but it was never bad at all. Plenty of room.

After the first mile, things stretched out a little more. We hit some uphills on the Boundary Trail and I easily passed quite a few folks who were huffing and puffing from going out too fast. Throughout the race, I used the uphills to my advantage, since I’m above average on climbs. Here it was even easier though.

The field continued to stretch out, and here and there I’d run with a few people, but make a move on an uphill and pass.

After mile two, we began a long, insanely steep climb to the summit. It was around here that I don’t think anyone passed me and held it for the rest of the race, sans for one dude at the end. More on that later.  A fun downhill after the summit…

Miles 3-6
… and for a while now I had noticed Ryan ahead of me. He’d been in sight for about a mile or so now, and I thought earlier on I was going to catch him. But everyone was now dialed into their paces for the most part, and I never gained ground, only able to hold the distance between him and I.

We finished the first loop a little after mile four, according to my Garmin. I did some quick calculations on my time and realized I was on track to potentially break 1h 20m, which was a loose goal of mine. Goal is probably too strong of a word, though. More like a “that would be nice”, as I hadn’t run this race before.

Second loop begins, which is identical to the first, except for the last mile or so. Decided to ditch my shirt as I passed by the start/finish area. Was still running strong, feeling fine and things were pretty uneventful for a bit.

Miles 6-Finish
Field substantially thinned out now. Passed around a half dozen runners during the final three miles, including one guy I had been running with for a while. Just like every other time, I waited for an uphill, then made my move.

Somewhere in the final few miles, the aforementioned Ryan was now no longer in sight. I wondered briefly if he had been eaten by a bear, but thought it was more likely that he just pulled ahead.

After reaching the summit for the fourth and final time (each loop hits the summit twice), it began a different stretch of trail than the first loop. This one would be more of a long, fast, very runnable downhill to the finish, as opposed to the winding switchback on the first loop. Both routes are fun, but it’s nice that the race ends on this long downhill. You can really fly on it.

I was alone on the entire downhill, aside from another runner in front of me I knew I probably wasn’t going to catch, and then the route hit the Boundary Trail and turned right for the final less-than-a-half-mile stretch to the finish. It was here that some dude came out of nowhere and passed me pretty effortlessly. I was doing 6:46/mile from the summit to the finish, so I found his speed pretty impressive. Trying to keep up with him only pushed me to go faster, so that was good at least.

Soon the trail broke to the field and it was just a hundred yard dash to the finish line. Crossed it in 1:17:05.

Post Race
I was pleasantly surprised by the faster than expected time. It was good enough for 23rd place out of 127 people. Looking at the standings from the last two years, my time today would have easily put me in the top 10 in both years, but considerably more runners this year and it was also a very stacked field. Plus, the weather was also great (i.e. no humidity) today, so that no doubt helped everyone.

But the more I think about it, the happier I am with the race. I had a lot of fun while running it. I was running fast but comfortably, pushing it when appropriate and just plain having fun out there. It went very well, especially for this stage in my running.

After hanging out and cheering on the other runners at the finish line, the awards ceremony was given and then I helped break down the finish line. After that, we got some fine grub and brews at Gritty’s in Freeport. Fine way to finish the day! 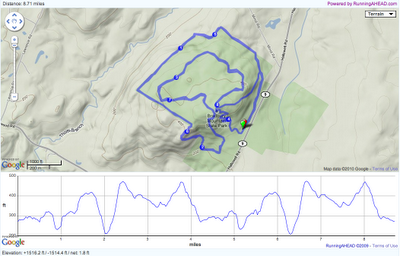