First off, as always, a huge thank you to Ian, Ryan and all the volunteers who made this such a great race! It was awesome to see such a strong turn-out on Sunday, and I think it just goes to show not only that trail running is gaining in popularity, but what a wonderful job the Trail Monsters do in putting on this race series!

The Breaker is definitely the most rugged of the three Bradbury Mountain Trail Running Series races, taking the runners up and down the summit four times on trails full of rocks, roots, twists and turns. There were quite a few runners coming across the line with bloody and dirty knees, hands and bodies from taking spills out on the trails, but everyone had a smile on their face! I ran this race in 2008, and finished in 1:29:39. I feel like I’ve been running pretty strong this year (despite a rocky start to the season with my DNF at Pineland in May), which is likely partly fueled by weighing less (an unintentional consequence of nursing/sleeping little/running/etc), running faster on a lot of my training runs (Less time to be out there! Must cram it all in!), and maybe just because I’m happy to be back out running and want to have something to show for my time on the trails. Regardless, I was really hoping I could run faster this year, and thought that 1:26 seemed reasonable. I knew I’d do some walking, up the Summit trail and in a few spots on the Boundary trail, but I vowed to use the more mellow terrain on the Tote Road, and the nice downhill at the end of the race to run as fast as I comfortably could and hopefully make up for some of the walking.

The morning dawned clear and cool. Irene and Dana came over at 7:30, and I left them with a happy Samantha. I picked up Nate, and his friend Dave, and we turned into Bradbury around 8:10, leaving us with just enough time to get our numbers, do a quick warm-up, go to the bathroom and gather round at the start. The start, as always, was a bit of a crush, but I kept to the right-hand side of the trail and just tried to keep up a good pace, picking my way through the roots and rocks and such as I went. I noticed as I ran along that it seemed to be warming up pretty quickly, but I kept on chugging. I walked the Summit trail, but took off running again at the top, going as quickly as I could on the Tote Road without feeling like I was going to have nothing left for lap #2. 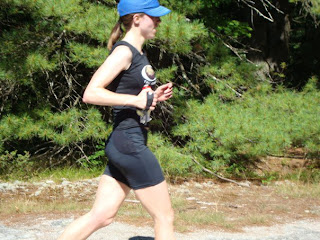 Then it was back up towards the summit and zigzagging down the Switchback trail to the start/finish area, and on to lap #2. By now, the crowd had thinned out a lot, and I was strung out along the trail with a few others, overtaking one or two guys here and there on the Boundary trail, getting passed by another, etc. I felt like I was all alone when I went through the aid station before starting back up the Summit trail, but as I walked as fast as I could up, up, up, I noticed there were a number of people ahead of me, walking too, back up to the top. Once I hit the Tote Road the second time around, I took off, trying to run fast, knowing I only had a few more miles. Even on the last uphill back up to the summit, I felt pretty good, and passed a fellow Trail Monster right before turning to the last downhill on the Terrace Trail. I really really didn’t want him to pass me back, so I ran for all I was worth down the trail, trying not to let my natural tendency to put on the brakes on the downhill take over. As I made the last turn toward the finish, I saw the woman in green who I’d been seeing here and there along the trail just ahead. I didn’t quite have enough real estate (or speed!) to catch her, and finished 5 seconds back. Darn! Still, my run was good enough for 1:24:04 and 1st in my age group! Cool. I’ll take it 🙂

Lots of my Trail Monster friends had great races, as did Nate and our friend Susan. Nice job everyone! After the race, I milled around, chatting with friends, helping a bit at the finish line, and managed to take home a very cool water holder from Nathan, one of the series sponsors. A great way to spend a sunny Sunday morning! Sam had a good morning too, enjoying her time with Grammie and Grampie. Ryan and I are very lucky to have such great parents who are willing to come hang out with our kiddo so we can run! Thanks guys!!