The Exeter Snowshoe Hullabaloo is exactly what a snowshoe race should be like. No snowmobile trails, no groomed ski trails, just sweet single track packed by a handful of snowshoers before the race. Since I’m new to the snowshoe racing scene I didn’t know what to expect from this race, turns out that no one really did since this was it’s first year, but I was surprised to see such a big field of almost 100 runners show up. With the number of runners and the fact that I knew nothing about the course, except that is was all single track, I was cautious about starting too close to the front. I took a place behind acidotic’s Chris Dunn, and he quickly called me out as a sandbagger, but I really wasn’t feeling very confident about this race. Of course, the downside of taking a conservative start on a singletrack race is that you really have to work to pass people. The other downside is that there are a lot of people who seed themselves too far up the field for fear that they’ll get stuck behind slower runners, but it turns out that they are the ones slowing people down.

The first 1/4 mile (or less) was packed out wider than the rest of the course to alleviate some of the pressure at the start, but it was still pretty chaotic when the “Go” call was given and at least one runner went down while jockeying for position. By the time the trail narrowed to true singletrack I found myself somewhere in the back of the top 20, a few places behind Chris Dunn and Steve Wolfe, moving along at what felt like a very comfortable pace. Not a race pace. 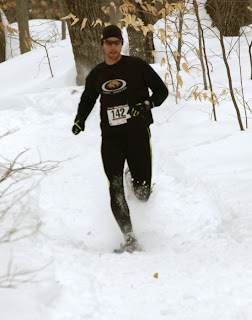 It wasn’t long before we came along one of many “passing lanes” that were created by one person walking a parallel track for about 10-15 paces alongside the course. This was a helpful way of giving runners an opportunity to pass without going fully into the deep untrodden powder, but it wasn’t a lot better and still required significantly more effort than the regular course. Since the leader of our snowshoe train was going slower than I wanted to it meant that I had the energy to put in a good burst of speed and work my way up the field when the opportunity came.

At the second or third of these passing lanes the runner ahead of me made a move and I followed. Unfortunately his speed petered out before merging and in an effort to keep a few of the places I was attempting to take I lunged through the powder and back onto the course picking off a few runners, and nearly taking out a couple others as I struggled to keep my balance. The result of this got me in between acidotic’s Chris and Amber, a little bit further up the field than I wanted to go in one move, but the pace of our train was still quite reasonable so I was able to recover quickly and settle back into pace without feeling like I was going to be the one slowing the train. Moments later Chris made a move to pass the runner ahead by veering off into the powder, big mistake. All his momentum was instantly stopped and this gave me the chance to surge ahead and take the place where he had been. 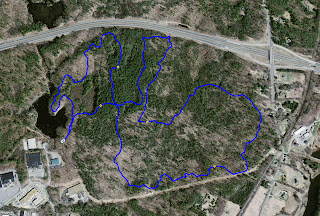 Eventually the guy in front realized that he had indeed set off in a place he couldn’t hold so he graciously stepped aside and let a few of us pass. Better to admit your mistake than get yourself run over. I was now pulling a train with Amber Ferreira right on my heels, Chris Dunn on hers and a few others right behind. I picked up the pace to the upper limit of what I thought I could sustain on this terrain and wasn’t surprised to find that Amber and Chris didn’t have any trouble matching me. I wasn’t confident that my place here was safe, but I wasn’t going to give it up without a fight. Each time we got to another passing lane I’d put in a surge of speed to fend off any possible attempt by anyone to pass, and then ease off the pace to catch my breath.

Eventually we caught up to another runner who obviously went out a little too fast and was now slowing down, but this kid wasn’t about to step off the trail just to let me pass, if I wanted his place he was going to make me work for it. No easy opportunities to pass presented themselves and the now somewhat slower pace allowed Amber and Chris to get right onto my heels. I was worried that one of them might make a bold move and take both me and the kid in front, or that if I stepped off trail to pass that I’d end up stuck in the powder and lose my place to both of them. Finally I saw my chance to make a move, a tight corner with a small tree on the inside. I grabbed hold of the tree and pulled myself around the inside of the turn, just barely making it past the kid. I then kicked it up a notch to try and put some distance between us. 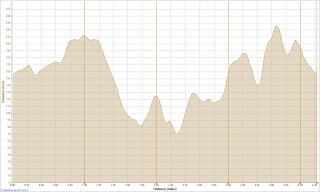 Amber and Chris didn’t take long to get past the kid, before I knew it they were right back behind me and the pressure was on again. I continued to surge each time we got to a passing lane and I began to wonder how much longer this race was going to go on. The course description said “The Snowshoe Hullabaloo is run over almost 4 miles of tight and twisted, packed single track” which I took to mean less than 4 miles. Apparently “almost 4 miles” can also mean more than 4 miles. When my Garmin said we’d covered 3.75 miles I decided it was time to try to put some distance between myself and the acidotic runners behind me. At 4 miles I began to wonder where the finish line was, but I didn’t let up. Finally the finish line came into sight and I still had enough in the tank to put in a good sprint to the line. 45:57 was good enough to get me a 10th place finish. 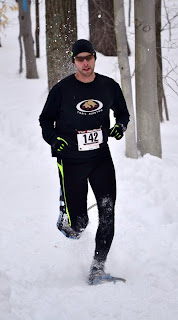 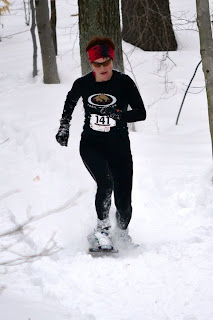 Emma came in “almost” 10 minutes later which was good enough for a 5th place female finish. No prizes for the Trail Monsters this week, but we were both happy with solid performances in a good sized race. Post race festivities featured plenty of fire, hot soup, chili and hot drinks. Definitely a fun race on a great course.