In my 4th consecutive week of snowshoe racing I returned to home turf for the second installment of the Bradbury Mountain Snowshoe Series: Bradbury White Out. After helping Ryan mark the course on Saturday I went out and ran the whole thing, partly to check up on the marking but mostly to think through my race strategy. I wanted to remind myself how it felt to run up the Terrace Trail which makes up most of the first mile of this race, and to figure out just how fast I could go down the South Ridge.

On race day I went out on the course early to help Ryan put out the final course marking and then get things set up at the picnic shelter for registration and post race activities. With a plethora of volunteers we got things set up quickly and there was plenty of time to sit back and chat with the other runners. Before I knew it it was time to get ready to race and I barely had enough time to get a warm up in, not quite as long as I would have liked but enough to get the blood flowing. 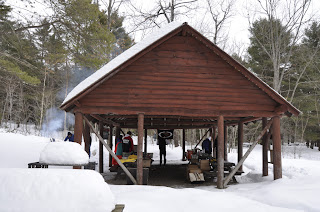 There were a few more people in attendance than there were at the Squall, despite a handful of people not making return appearances. Based on my performance at the last two races I thought that I had good reason to start in the front row, I even thought I might be able to hang onto Ryan for a while… I had asked Ryan before the race if he planned to take off crazy fast, he said he didn’t have a plan, but he did end up taking off crazy fast and that’s how he ran the whole race. I lost sight of him after 1/4 mile and never saw him again until I got to the finish and I think he had already changed his clothes and had a cup of soup by the time I got there. 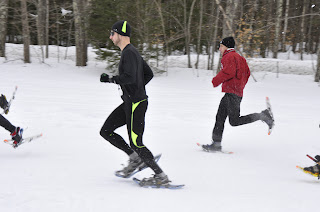 I tried to set off at a sensible pace, since I didn’t get much of a warm-up in I thought I’d take it easy for the first 1/3 mile so I didn’t hit the Terrace Trail too out of breath. I figured that if I started the long climb gasping for air I’d be dead before I reached the top. I was a little surprised to find myself back in 8th place going up the hill, but it was still early in the race and I had hopes of picking up the pace. There was someone right on my heels going up the Terrace Trail so it was good to have a little incentive to work hard. As soon as we reached the top and turned towards the Northern Bluff I caught a glimpse of Blaine up ahead and set my sights on catching him. Unfortunately Blaine wasn’t feeling his best so he stepped off the trail to let me pass. 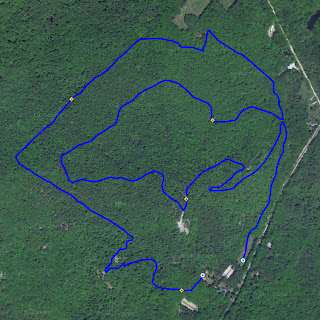 For nearly a mile I was on my own, no one in front of me was in sight to chase down and no one was right behind me applying any pressure. I thought I did a good job of picking up the pace on the gradual downhill of the Tote Road but it wasn’t long before Chuck and Jeremy caught up to me. Chuck had been complaining about feeling tired before the race, following the previous days long run, but he certainly wasn’t running like he was tired today. I was supposedly relatively fresh since I had done my long run on Friday but I had all I could do to keep ahead of Chuck and Jeremy. 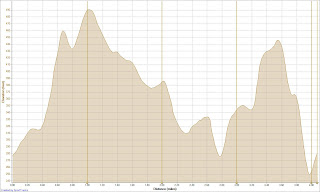 Chuck is an incredible downhill runner, and knowing that the last 1/2 mile is all downhill (with one tiny exception) I wanted to try and put some distance between us before we got there, but it just wasn’t happening. My only hope was that my knowledge of the course would give me some advantage. I’d been up and down the South Ridge Trail at least half a dozen times in the few days leading up to the race so this was bound to count for something. Shortly after starting down the South Ridge we ran into Andy coming up the hill after having made a wrong turn. He fell in place behind Jeremy and now there were 3 people right behind me and any one of them was capable of catching me.


Running the South Ridge in these conditions required the perfect balance of speed and control. The descent is steep enough to allow you to build up incredible speed, but there are enough sharp turns along the single track trail that force you to reign in your speed or else go off trail and punch through the crusty top layer of snow into the deep powder beneath. My knowledge of this trail seemed to pay off a little bit, but not much as you can see in the photo: 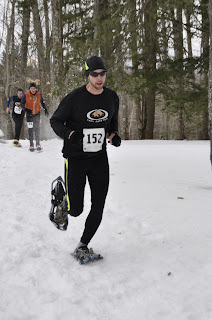 photo by Don Penta
The finish of this race is one of the cruelest out there. In any other context this tiny uphill wouldn’t seem so bad, but after nearly half a mile of super-fast downhill your legs just don’t want to transition back into uphill running. And the soft snow just makes it so much worse. Not much of a sprint finish, but luckily everyone seemed to be struggling just as much as me and I was able to hold on to my position to finish in 6th place.
RESULTS
PHOTOS
time: 37:55
distance: 4.25 miles
pace: 8:55
place: 6/35