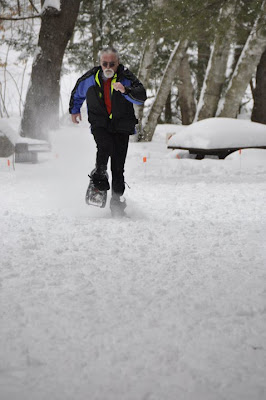 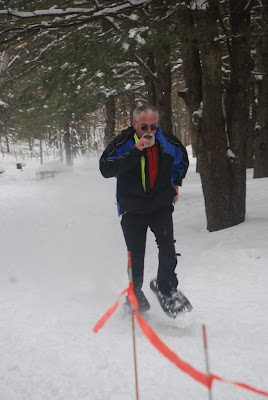 A memory of me: heading for the finish …notice the white snow dust behind me, it was a sprint actually finishing the race ….and glad to be done. 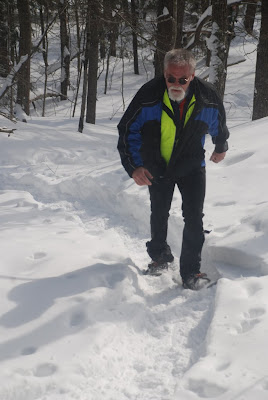 A less accommodating one of me struggling on an uphill. Note: no snow dust….not moving too fast here

The Bradbury Blizzard…….an excellent combination of breathtaking (I mean actually taking your breath away) up hills and crazy single track twisting downhills that take almost as much energy to maintain an upright position.

After snow shoeing the Bradbury White out a couple weeks ago I realized that snow shoe racing on this type of terrain was not something I was very good at, well actually I should classify it snowshoe walk/running.

The down hills at the Whiteout proved that my core muscles were not anywhere near up to par so I decided to work on them a little harder for the Blizzard. I think the extra work helped but with the softer and deeper unpacked snow, I really couldn’t compare the two.

This being only my second snowshoe race and the fact that I really struggled during the first race, it was easy to decide to start in the rear again…..only this time I started dead last. I can tell you that all those other snowshoers throwing powdery snow in the air in front of me actually made me glad I hung back a bit.

The first half mile of the race was a crazy twisty uphill and I was so winded at the top, I couldn’t imagine running five miles. I thought of quiting which is a common feeling for me in the start of any race, of course I didn’t plus I figured I would wait until after the down and see how well I recouped.

Unfortunately, the downhill which usually allows for a little rest because of the pull of gravity, did not offer any rest in these conditions. The constant need to keep the body upright as the twisting trails, skinny single track and soft snow tried their hardest to throw me down and suck all the energy from my body, had me wishing for an uphill.

Once the uphill arrived, I was wishing I would pass out so I could get a ride down on a stretcher. My spirits were uplifted a bit as I passed a couple people in the first mile, then a couple more during the rest of the first loop.

I was actually ahead of a couple runners that beat me in the last race, so I was beginning to feel better and I was settling in to a steady pace. At the halfway point I was actually considering trying to speed up a bit to maintain my position of not being last.

The trek up the switchback trail for the second time convinced me that perhaps I should just be happy to finish, never mind beat anyone. As I crossed the peak and started the downhill, it suddenly dawned on me that even though I was beat, I was having fun, yeah it was tough but at the same time, how many people show up for an event like this……….only the toughest.

During the second loop, I passed three more “faster” runners only to have them eventually pass me back. As I realized the last mile coming near, I tried to stay right on a runners tail in hopes of out kicking in the end to steal a spot. Problem is, she was much faster than me on the uphills. I figured the last down hill on the Terrace trail would be my only hope, so I threw caution to the wind and went by.

All I had to do now is maintain the distance and actually earn my spot. Somehow I stayed in front and found a little bit extra for a finishing kick. It helped that I could hear the trail Monsters yelling as I rounded the last corner. Taken out of context, one would think I was the first finisher rather than almost the last.

Again Ryan and all the volunteers created an amazing experience. Much more memorable than all those road races where a I am in the mix of hundreds of people crossing the finish line where no one knows your name. I guess being part of the Trail Monsters is a modern version of Cheers but instead of meeting at the bar, we meet in the trails.

I found out later when I down loaded the Garmen that I did in fact run a faster second loop. What is funny, is that now, a day later I can envision all those times I slowed down and I feel that I not only could I have but I should have run faster at those points. It is so much easier to “say” I could have than to actually find the strength to do it on race day.

It was a bit disappointing not to earn the “Baddass” status and get one of those rare Badass hats. Congrats to all the did.