This was my second consecutive weekend of a Saturday long run on snowmobile trails followed by a snowshoe race on Sunday. This combination seemed to work OK for me last weekend (i.e. didn’t kill me) so I thought I’d try it again. This week’s race was the Hebron Hills Snowshoe Classic put on by our friends at acidotic Racing. I didn’t really know what to expect for attendance at this race because this was it’s first year, but since it was an acidotic event I knew there would be at least a few strong runners. I managed to assemble a full team of Trail Monsters to attend the race, including Emma who was making her snowshoe race debut. Four rode up to Hebron with us, Chuck and Jeanne made up the rest of the team. 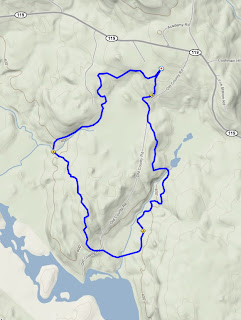 Before the race I thought I might take the strategy of pacing off Chris Dunn for most of the race and then seeing if I had it in me to kick it up at the end. But as soon as we started running I realized that was a totally lame strategy, so I just went out at as hard a pace as I thought I could sustain for 3.5 miles. Of course, having no idea what the course was going to be like I really didn’t know if I’d be able to maintain that pace.

video of the start by aussiegtl
In the video you can see Chuck, Emma, Four and I lined up at the far left of the start line, kinda looks like we picked the wrong end to start on… It took me about 30 seconds to settle into 4th place, but I wasn’t very comfortable here. I knew there were a few people behind me who usually beat me in races and I figured it was just a matter of time before one or more of them caught me. The first mile was pretty much all downhill allowing for a fast split of 8:02, which still felt like hard work given the relatively soft snow. Sounds weird, but an 8 minute mile really feels like flying when I’m on snowshoes.

The course was a mix of groomed XC ski trails, much like Pineland, and sweet single-track snowshoe trails, much like Bradbury east side. The course description used the phrase “short steepies” to describe the hills, and that’s definitely what it felt like, except for the last hill which felt like a long steepy. Most of my running these days has been taking in just this kind of hill so I felt very comfortable racing on this terrain. Comfortable in the sense that I was well prepared, uncomfortable in the sense that I was working my ass off because I was being chased by Chris Dunn the whole time. I knew that Ryan had beaten Chris by a mere 3 seconds the day before at Sidehller so I suspected that Chris was out for revenge. I just hoped that yesterdays long run left me feeling less tired than Chris felt after his race (although I was out there like 4 times as long as he was). 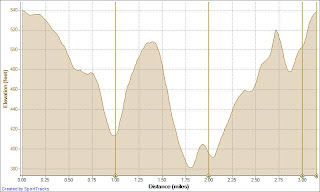 For most of the race I don’t think I ever got more than a few paces ahead of Chris, and at times it seemed like he was about to step on the tails of my snowshoes. I could see Scott Hornney, in third place ahead of me, off and on throughout the race but there was no way I was going to be able to catch him. The course was frequently switching between single track and wider ski trail and I made sure that each time we came to a section of trail where Chris might have enough room to pass that I ran fast enough to prevent him from doing so.

Most of the last 1.1 miles was a fairly gradual uphill, but there were a few steep sections and one particular hill that Chuck later referred to as being “really special”. It delivered a special kind of hurt, but I was determined to run the whole thing. Even when I could tell that the footsteps behind me were walking, and possibly even gaining on me, I was determined to run every step of this race. I crested the hill with Chris right on my heels but it was the following descent where I really put the hammer down and finally began to pull away from him for good. The last 1/4 mile was all uphill and no doubt incredibly slow, but I was giving it all that I had. If anyone had been watching I’m sure they would have wondered why it appeared to take so much effort to move so slowly.

Eventually I could see the trees thinning out ahead and knew that I was approaching the field with the finish at the far end. The last few feet of the final climb was some of the softest snow on the whole course and I was nearly reduced to a walk. Once up on level ground it was a balls to the wall 100 meter sprint to the finish. 28:59 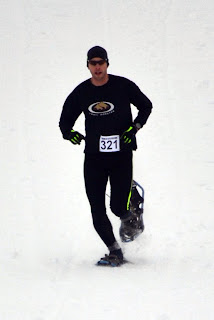 It was quite unusual for there to be only 3 people waiting at the line when I came it, but then again, most races that I do have more than 23 participants. I congratulated the other finishers who came in ahead of me and turned around to see Chris coming in to the finish and then Chuck not too far behind him, then ran slowly back along the course to find Emma. I found her about 3/4 of the way up the final climb, working hard and not exactly happy to see me. I offered some encouragement but she made it clear that she wanted to push through this last part alone. I stepped back and watched her finish her first ever snowshoe race in first place. 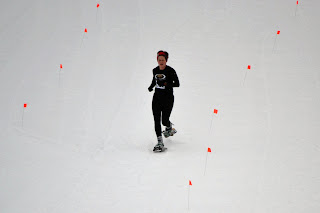 A few minutes later Four came up the hill, seconds behind aR’s first female runner. Anyone who has seen Four race knows that he always has one hell of a sprint finish, and I felt just a little bit bad for the woman who became the victim of his heroic sprint. But not that bad since she was running for another team. Jeanne came in a couple minutes later to round out the Trail Monster team, finishing 3rd female and first female masters runner.

This was a fun course, well marked, on a good mix of challenging terrain. Excellent INDOOR facilities provided by Hebron Academy, and overall top quality management by our friends at acidotic Racing.