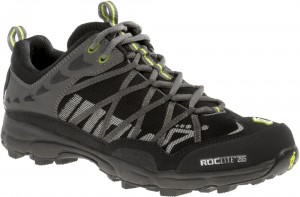 One of the things I love about Inov-8 is that they don’t go updating their shoes every year for no good reason, like pretty much every other shoe company does. I started wearing the 295’s in 2008 and probably ran over 1000 miles in two different pairs of these shoes between 2008 and 2010. In 2010 Inov-8 released an update to the 295 with the only noticeable difference being a denser mesh used for the fabric of the upper, with no appreciable difference to any other part of the shoe.

Outsole
The Roclite outsole has deep lugs with a relatively high percentage of open area providing excellent grip on all surfaces. Inov-8’s “Sticky Rubber” compound provides good traction on wet rocks, this shoe has better grip on wet rock than any other shoes I’ve tried.  The outsole material is fairly soft, providing an extra level of cushioning to the shoe. The only downside to the softness of the sticky rubber is that it wears out quicker than denser outsole materials, but given the benefits of grip on wet rock it’s a fair trade off.

Midsole
9mm heel-toe differential. The midsole is made of a single density foam, very soft and flexible and offering a good amount of cushion. Over time the rubber compresses slightly as evidenced by the “wrinkles” that appear along the sides of the midsole.  The forefoot is very flexible, the midfoot to heel is stiffer but there is no sign of any hard plastic material in the midsole. 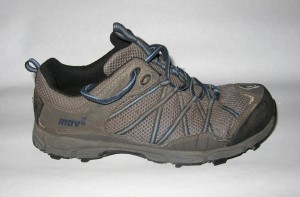 Upper
Fairly open mesh in the toe box allows the shoe to drain/breathe very well. Prior to 2010 the mesh was one of the weakest parts of the shoe and I developed holes at the flex point of the upper directly behind my toes and on either side of the shoe. I also had a problem with the nylon webbing  that is used instead of eyelets wearing out after about 500 miles. In 2010 the shoe was updated to use a slightly denser mesh in the uppers which looks like it will hold up better.

Fit
One of the most noticeable characteristics about the fit of this shoe is the roomy toe box, both in terms of width and volume. Some may find it too roomy, but this is one of the reasons I like this shoe for longer races where my feet might swell and will appreciate a little more space. As with most Inov-8’s the heel cup is fairly low but snug fitting enough to make the shoe feel secure. 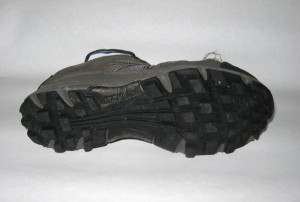 Use
The Roclite 295 was my go-to shoe for 2008 and 2009 before I switched to the X-Talon 212 in 2010. The only reason I didn’t get a new pair of 295’s in 2010 is because I was doing mostly shorter distances, looking for a more minimal shoe and the X-Talon 212 worked great for those runs. I do plan to get another pair of 295’s this year as I ramp up my training for the Virgil Crest 100 miler in September. In 2008 and 2009 I wore the 295’s during winter training runs, races of the Bradbury Mountain Trail Running Series, Escarpment, Vermont 50, Stone Cat Marathon and 50 miler and pretty much everything else.

Although the meshy upper lacks durability this shoe drains better than most. I’m not a fan of GoreTex in shoes, my philosophy is that that you can’t keep water from getting in your shoes, so when it does you want it to be able to get back out just as quickly as it came in and these shoes fit that philosophy perfectly.

My only complaint is that the shoe wore out more quickly than the Roclite 315’s I had been wearing before, which lasted close to 1000 miles, but given the weight, flexibility and grip of the 295 I think their life span (500 + miles) is as good as most other shoes out there especially when you consider the type of abuse I put them through on a regular basis. I consider this to be one of the most versatile shoes Inov-8 makes, suitable for any distance and any terrain, including wet rock.