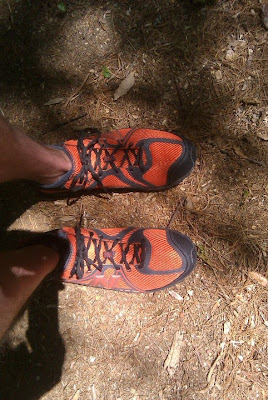 Review of: New Balance MT100 and Libby Hill Trails.
I’ve avoided the New Balance MT100 because I’ve preferred a more flexible shoe. The MT100 is stiffened by, among other things, a plastic rock plate in the fore/mid foot. But 3.5 weeks ago I bruised the ball of my foot by landing on a rock during an interval recovery of my Blackstrap Hell repeats. First time for everything. I was wearing the New Balance MR790, which is what the MT100 replaced. The initial contact with the rock was noticed, but I didn’t really give it a second thought as I continued my Hell repeats. But continued running on trails in thin soled shoes has continued to aggravate the bruise (or whatever it is – there is no bruise that I can see). Even the groomed ski trails like Pineland and Twin Brook have enough rock sections that re-aggravation was guaranteed.
So I took advantage of the New Balance outlet in Oxford and purchased the MT100 in burnt orange. I also didn’t get very far before running with them. I pulled over in Gray and ran the outer loop of the Libby Hill ski trails, first counterclockwise then clockwise. The trail head is near the parking lot of the Gray Middle School. I skied these trails for the first time this winter and fell in love at first sight. They are good running too. They are wide, like Pineland or Twin Brook but not quite as built up. The trails have a little more natural rock in spots and on my return lap my ability to avoid rocks was a little less sharp. But the MT100s performed beautifully at distributing the pressure, indeed better than my Inov8 295 or Inov8 315, which are much burlier shoes. Very sweet. These are now my goto shoes for Bradbury and Blackstrap Hell. I’ll continue to use the 790s at Pineland and Twin Brook
The outer loop at Libby Hill is 3.5 miles and is classic John Morton design (who also did Pineland and Twin Brook). There is some nice looking single track as well but with the exception of my initial climb from the parking area, I stuck to the ski trails to avoid tempting fate with sharp rocks/roots. There is also at least one sno-mo trail that cuts across too. All told, you could probably get in a 6-7 mile run in without too many do-overs. Finally, there is a sweet looking pond at the bottom of the trail system that would be nice for soaking the feet after a long run. It’s only about 1/4 mile back to the parking area from the pond so it’s in the perfect spot. 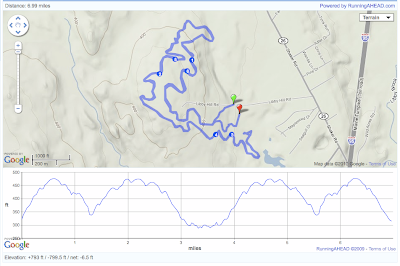