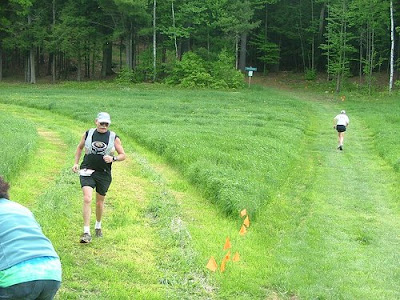 Well, I ran the Pineland Farms ” very Challenging” trail challenge and actually finished! The last two days leading up to the race I was plagued with numerous random thoughts….visions of struggling, wondering if I was really ready, did I train right? I had energy because I was not running for the two days before the race, yet I was very stingy with it. I guess I was trying to hold onto that energy assuming I could store it up for the race.

All I can say is I was very nervous for those two days. My crazy mind even searched for a reason not to show up. I know, that is foolish thinking and I am sure many people in the past have thought that way…maybe just wouldn’t admit it to everyone.

I knew better of course….how could I justify all those hours of training if I didn’t actually try to run the race? Besides, too many people knew I was running and also knew I was fit and ready for the race. So……no excuses.

I decided to get there early and cheer on the 50 mile starters. I was too excited to sit around home and wait. My battle plan was to cheer on the 6 am starters then offer to help for an hour or so to keep my mind off the race.

As it turns out, when I returned to my truck to double check my preparations, I realized that I left my fuel bottles home in the fridge. This really pissed me off as I was so careful to make sure I had everything ready…..how could I forget the fuel?

I labored with the thought of running without my fuel. I knew the aid stations were well stocked and even though I didn’t train running with most of the food there, I don’t usually struggle digesting any food.

As much as I hated driving back home, I couldn’t stand with the thought of doing poorly because I didn’t eat right. I suppose if I had a few of these under my belt I
could chance it. So off I went …..I hoped this wasn’t the start of a very poor race and had visions of something outrageous like getting a flat tire or some fool sideswiping me….even getting picked up for speeding (though I was following the posted limits)…..electrodes in my brain were firing at will and I didn’t seem to have any control over my thoughts.

Upon returning, I proceeded to gear up as I packed all my goodies into the Nathan vest, suck down a gel pack along with 8 oz of water. I walked up the hill to the start area and suddenly was overcome with an eerie calm. I don’t know if it was farm atmostphere with hay bales, picknic tables, Eric with his coveralls and large straw hat or Ian shaking my hand with the upmost confidence in my performance today, but there were no prerace jitters, no concerned thoughts, no doubts.

We lined up for the pre-race talk and after a couple funny remrks from Ian and Eric, the cow bell rang and I was running my first 50K ultra race. I knew right then that I was going to finish……there was no doubt….This feeling was so foreign to me. I usually hate the start of races as my Heart rate spikes and doubt flows in with every breath, but this one was different.

I felt great! The air smelled farm fresh and the temps were perfectly cool. I knew and was prepared for the faster than practiced start. I was being dragged along for the fisrt mile or so but was not too concerned. I planned for this and knew I could settle down to my first 1/3 race pace as soon as things settled and the group spread out.

By mile four I was settled into a very comfortable 12 minute pace and fluxuated plus or minus 30 seconds for the first 10 miles. As the main group continued to lose me, I felt that I should probably be running faster. I knew there were only about three 50k runners behind me and worried about them passing me. I was reassured by Stephen (from Gorham) that I was doing the right thing and not to worry about the people in front of or behind me. He said I would probably cross paths with many others runners more than once during this race. He is an experienced 52 year old ultra runner and was easy to pick out in a crowd with his swinging pony tail.

As I started lagging behind, he yelled to me, “don’t worry, you will surely see me again” He was right as I ran with him at least two or three more times during the race. That felt so unusual as in most of my races in the past, one usually only passes or gets passed once by the same runner.

Somewhere around mile 6 or so I passed Ann, somehow she recognized me and introduced herself. Appearantly she has read my blog…. It is so cool to be famous…..OK, not really famous but at least some one knows me.

Ian cheered my on at one Aid station and had anouther guy ring the cow bell….somehow this helped me. I guess just having support is so important even in the early miles and the cow bell? well it is saying with each ring, this wonderful sound can be yours to take home and enjoy in the privacy of your own back yard….all you have to do is finish the race!

I hit mile ten and enjoyed all the support from the Trail monster crew as they assured me that I was winning (at least that is what it felt like with all that yelling and cheering) I stopped at my station and regrouped. I was ahead of my predicted time for the first third and I was feeling pretty darn good.

I flip flopped positons with John from Cape Elizabeth for the next 4 miles and we had plenty of time to talk about running and racing….damn he was doing real well and he had over 10 years on me.

Coming out of the woods I saw this very tall runner that looked exactally like Dan’s description of the crazy Kevin Z and I was right. We ran the next mile together and had a chance to talk a bit about his crazyness…. like not sleeping all night and his recent races (which sounded a little to recent for racing a 50k today) He had all the excuses needed to not run today yet he showed up anyway….that is comitment brother!

I guess this would be too long of a post for a “blow by blow” description, but I would like to thank all the people who supported me…….and helped me accoumplish finishing a 50K…..all those Trail Monsters who run seriously faster and longer than me but still made me feel like part of the group. All my blogging buddies like Dan, Rob and Laurel who kept telling me I was ready for this even when I felt for sure I wasn’t.

Through this whole race they would pop up out of nowhere and yell me on. I think I saw Ryan at least three times as he was negotiating the trails way…way in front of me, Emma lifted my spirits (even though she was running the 50 miler and passing me),
Jeff seemed to be everywhere…I was confused at first(cause I thought he was running the race….he was) when I saw him helping at an aid station and he convinced me that I was looking strong. Of course at the finish, Blaine rushed up to congradulate me and Ian had a bigger smile than me as he put the cowbell around my neck and shook my hand.

There was not one moment during this race that I felt I wouldn’t finish. I knew at the start and I knew when I crossed the street for the second time…..but I really knew when I hit the “last mile” aid station…..I was a 50k finisher right at that moment and spent the next mile visioning my extremely fast and gracefull kick at the finish line…Of course it wasn’t that gracefull and surely not real fast…but it was a kick and I finally became an ultra runner.

All those longs runs made sense now as I felt very tired yet still quite strong. Unlike last years 25K where I am sure I literally died somewhere in mile 12….this year I ran strong the whole 31 miles. I guess it proves that I not only trained well but I learned how to run within my means and fuel my body properly.

I loved this race…oh it was tough but I planned for it and I conquoured it. I drank three victory beers and then headed home to jump in the cold inviting water of my pool….it felt great! We had family up for the weekend and I was suprised to be able to play woofle ball and run around only a few short hours after the race.

I assumed I would be suffering Monday but only had minor muscle discomfort and had little problems doing normal activities like mowing and painting the deck. I was a bit lame but no where near how I thought I would feel after running 31 miles.

That’s right, I ran a 50K, I am an ultra runner, I did it! I really don’t know what is next, right now I just want to savour this feeling for a while.