2014 TARC Spring Classic Race Report: In Which I Somehow Manage To Come In 1st Woman

Going into this race, I wasn’t quite sure what to think. I’d gotten in some decent long runs, but I lost two weeks of training when I was sick a few weeks ago and missed the chance for a “fast” road 20 miler down in NC. I hadn’t gotten in as many back-to-backs as I have in other training cycles. I haven’t been sleeping, although I suppose I should be used to this one by now. The forecast was calling for rain and 45 degrees. The course was no doubt going to be muddy and slick. So who knew what would happen? But without a doubt, it would be a good training run, and a good time. There would be mud, there would be friends, and TARC always puts on a good race.

We headed down to Ryan’s parent’s house on Friday night. Sam was exhausted, and once her head hit the pillow, she fell asleep and stayed asleep all night. And I managed to sleep through the night too. Oh miracle of miracles 🙂 The alarm went off at 5:00 am – way too early – but we got up, grabbed breakfast and the necessary coffee, handed off the monitor to Irene, and were on our way a little before 6:00 am. Took us 42 minutes to get to the ‘parking lot,’ where we were probably one of the first dozen cars to arrive. Michael Wade was already there, so after getting our numbers and using the port-a-potties, we chatted with him for a while. It was fairly raw out, but wasn’t yet raining, and I hemmed and hawed about what to wear. I ended up changing into my tights at the last minute, and wore a light long-sleeve shirt with my TMR short-sleeve short over it, plus brimmed hat and light gloves.

There was a great TMR contingent at the race. Brenda, Ian, Emma (at 33 weeks pregnant! Rock star!) and Chandra ran the half marathon. Kate, Nathan and Ann ran the marathon. And John, Ryan, George, Val, Mindy and I lined up for the 50k. Plus, we had Jamie, Amy, Rick and Four as race crew, grillers and cheering squad. 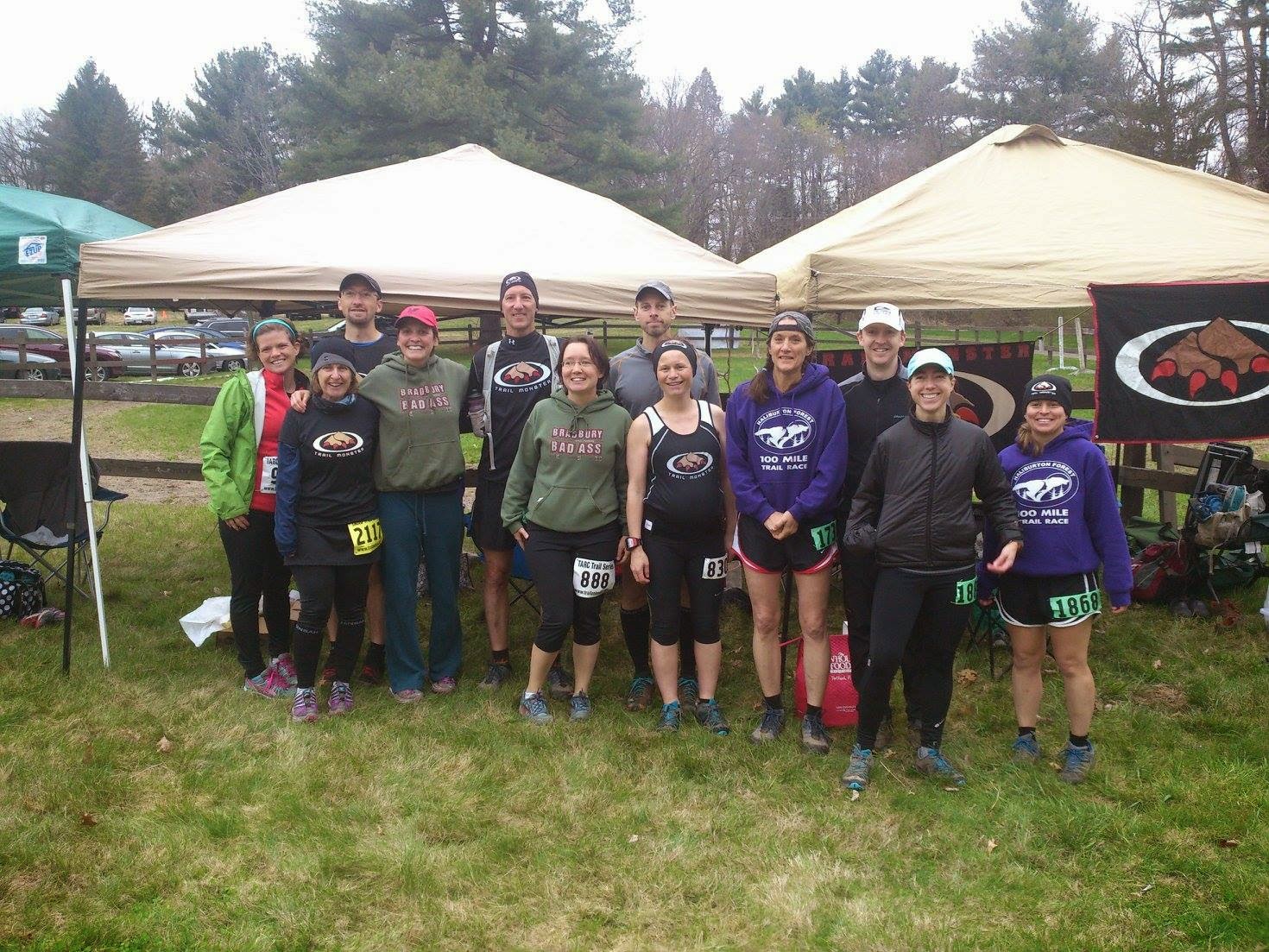 Team TMR
Somehow (oh well, probably because we didn’t go to the pre-race meeting – oops!) most of us missed the fact that they were planning to start us early, and so there was a mad rush to all get over to the start line. Yikes! Because of that, we all started at the back, meaning the first mile was a lot of bobbing and weaving. It was a bit chaotic and not the most laid-back way to start a race! I definitely ran the 2nd mile too quickly trying to make up for a slow 1st mile, but then settled into what felt like a decent pace. I was much too warm for the first few miles but the second it started to rain, I knew I had made the right choice. I felt very comfortably and maybe even a bit cold until I put back on my gloves.
I didn’t bother trying to pussyfoot around the mud holes like many were doing. It was much faster to just go right through, at least for the first few laps before things really got mucky! I realized fairly quickly that I probably wasn’t going to be averaging 9:30s for the day. So, I just settled into what felt like a comfortable pace and kept on moving. I did well through lap #3 with fueling, and tried out my SaltStick tabs, taking one at mile 10. I knew I wasn’t going to sweat quite as much as I would on a warm day, but I do sweat a lot, so I figured it couldn’t hurt, and plus, I wanted to try them out. Didn’t eat much “real” food from the aid stations during this race though. The start/finish was the only aid station and it was pretty crowded each time I went through, although I did stop for a cup of coke at the end of lap #3 and #4.
I never really truly ran with anyone, although I flip-flopped with a number of runners the first few laps, finally passing the two women I had been with for good somewhere on lap #2. With all the different races going on, it was hard to know who was running what and where you stood. Nothing to do but keep on running 🙂
I kept up a fairly decent pace through lap #3, but definitely slowed down on lap #4, and I wasn’t as interested in my gels either. I forced one down at mile 19, and then took a SaltStick tab at mile 20. I knew this 4th lap was going to be the hardest. It was also when the mud got pretty nasty. I had to walk through most of the mud pits, otherwise I would have no doubt lost a shoe or fallen. Things had gotten pretty slick. 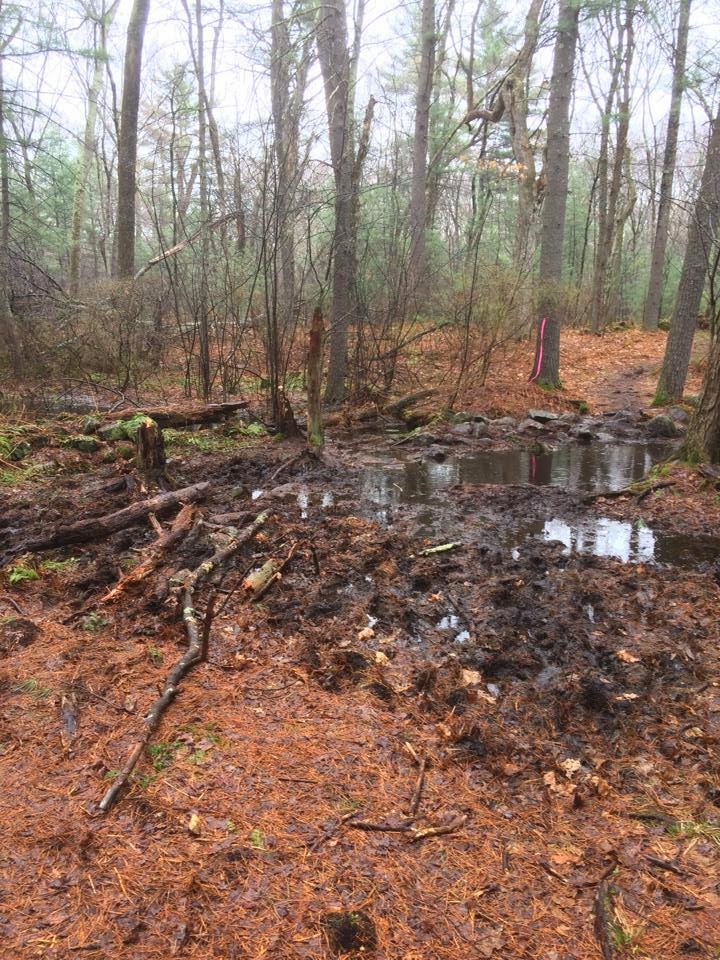 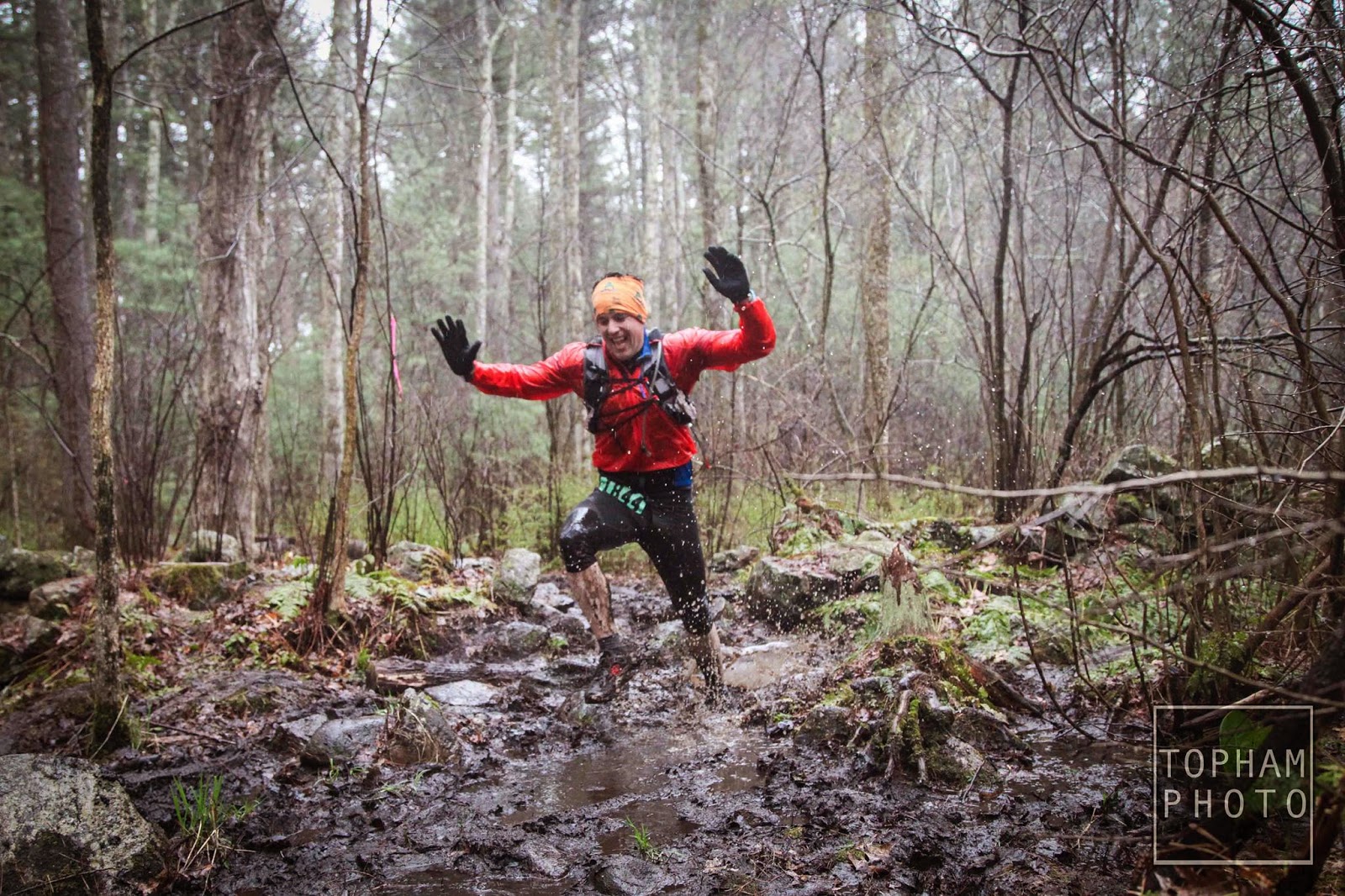 Not me ;), but a good look at how muddy the course was! Photo by: Topham Photo

As I started in on the last lap, I had no doubts that I would finish, but also knew it likely wouldn’t be a fast lap 🙂 I didn’t feel terrible, I just didn’t feel like I had a ton of energy to push the pace. I managed to gag down one last gel at mile 24, and then took a final SaltStick pill around mile 26 when I felt my quads beginning to tighten up. I really didn’t want any cramping, and the salt seemed to do the trick. I was able to keep running with no problems. When I signed up for the race, I had originally had thoughts of running 9:30s, then dialed back those thoughts to running sub-5:00 a few weeks ago. 5:00 came and went, and I was still out there. Oh well. Such is life. Still, I passed a lot of hurting people on that last lap, was moving decently, and didn’t walk anything except the mud holes and the one steep but short uphill.

At about 2 miles to go, I came upon John, walking. I was surprised to see him, and told him to come with me, but he said, “Oh man, the winds have gone out my sails. I went out too fast.” I pushed in the last mile and into the finish, but that meant a 10:xx mile. Ha! So, I didn’t manage to get sub-5:00 but perhaps in the end, my time was more indicative of the training I’ve put in and the paces at which I’ve been running my long runs. Or perhaps it was part that and part conditions. Either way, my watch read 5:10 at the finish line.

I was happy to be finished and to come in feeling pretty good, with no cramping, even if slower than I would have liked. I walked over to the TMR tent and had just sat down when Josh, one of the race directors, came over. He said, “Heard you won.” I was like, “What?!” He said, “Are you number 1880?” I had to look down at my leg to be sure, but yup, that was me. Turns out I managed to win the women’s race! With my slowest time yet on this course. Holy shit! I won?! I really couldn’t believe it, but they gave me my prize, so I guess I did! Guess I can’t complain about my time now 🙂 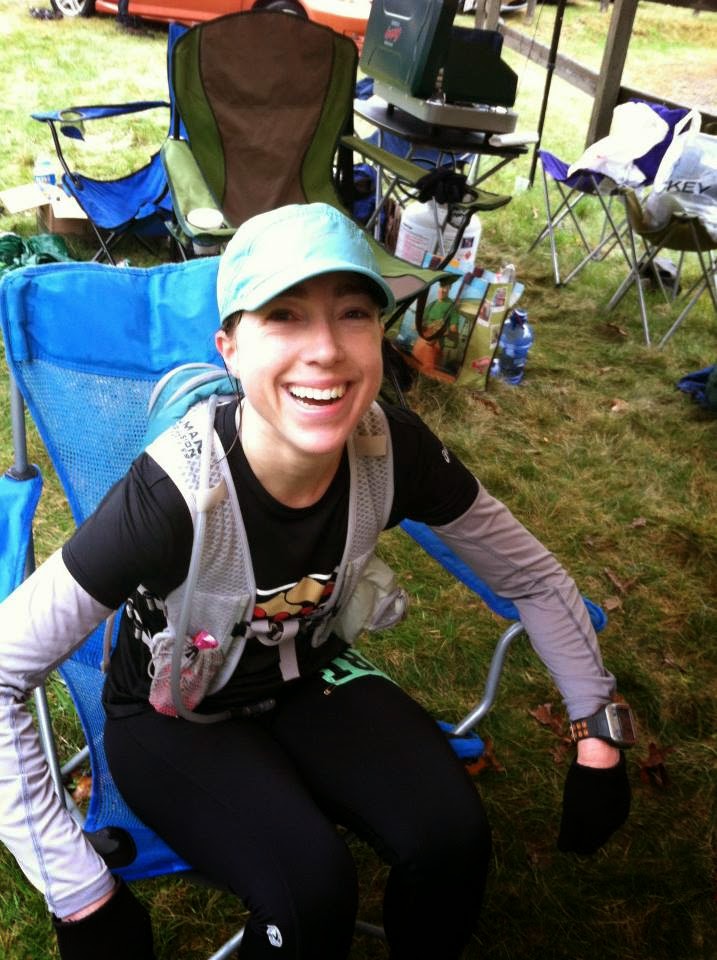 Just sitting down to relax… 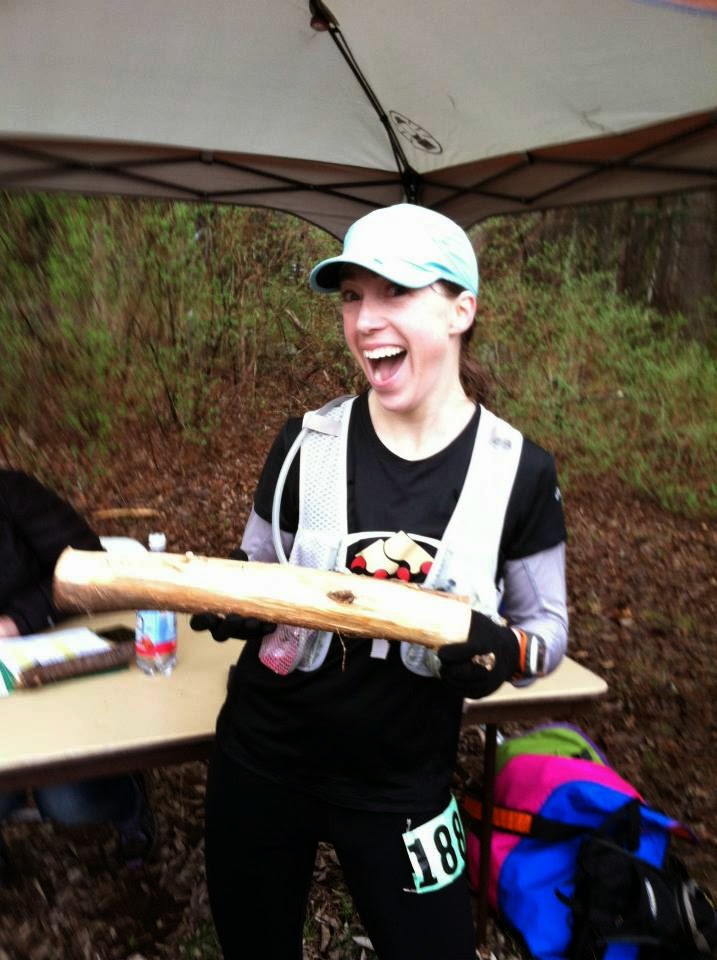 Me and my prize, a big chunk of wood 🙂 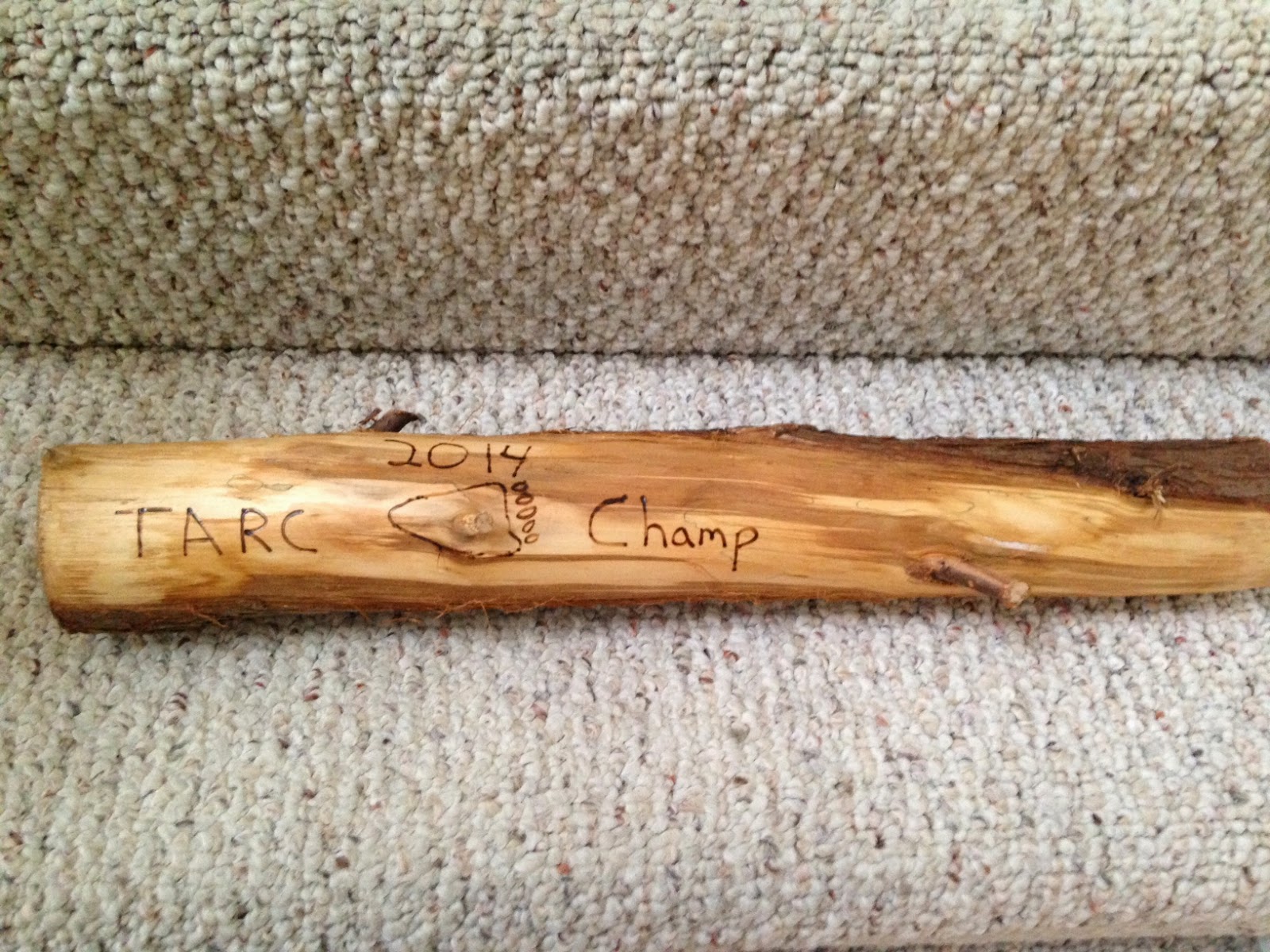 Carved very nicely with “2014 TARC Champ”
I would never have guessed it and I really had no idea out on the course that I was in first. I guess when I think back, I realize that all I did was pass women and never got passed by any (at least after lap #2), but I just assumed there was someone ahead of me. I wish my time had been faster, but I know it’s all about who shows up on race day, and I guess none of the fasties showed up today, so I’ll take it.  🙂
As always, TARC put on an awesome race. The course was well marked, the volunteers and race directors are super nice, it was a fun atmosphere, and always a good time. It was really fun to have so many Trail Monsters running, and to have Jamie, Amy, Four and Rick there to man the tent and help out all of us runners. After the race, once I had changed and stopped shivering uncontrollably, it was great to sit and hang out. Although we all wished it was warmer and sunnier weather, we stayed dry under the tent until everyone had finished, with everyone getting up to cheer our final and most smiley runner, Ann, into the finish. It was a great, muddy, rainy, cold day out on the trail with friends.
A lot of great Trail Monster performances out on the course, including an impressive half marathon by 33 week-pregnant Emma, but I am especially proud of Ryan’s run. After 2 1/2 years of being on and off the injured list, he completed the race with great style, coming in in 4:31! Wowza! Awesome job, Snowman! So glad to have you back 🙂
RESULTS
27/108
1/31 women
Official time: 5:11:21
Older Entries