First of all, congratulations to Erik for putting on a great race. I had a blast and I think most other runners did too. Erik was in charge of organizing three mountain races at Sunday River this past weekend, 1-peak 4 miles, 5-peaks 8 miles and 8-peaks 12 miles. I guess one race just isn’t enough for him any more. 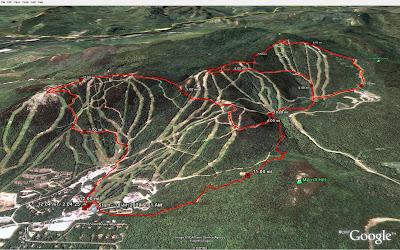 On Saturday afternoon after the Wife Carrying Championship Emma, Jim and I helped Erik finish off the course marking for Sunday’s races. This was the first time Emma had seen some of these trails and even though she hadn’t planned to race, wasn’t feeling 100% (lingering knee trouble) and had vowed not to participate in a race until next summer she couldn’t resist and signed up for the 4 mile, 1 peak race. I was doing the 8 peak race, Jim the 5 peak, and Shauna the 1 peak. There was a big contingent of other Trail Monsters who came up to compete in each of the races including James, Stephen, Bob, Tom, Jeanne, Chuck, Katy, George, Don, as well as many other familiar faces from the Bradbury Series. 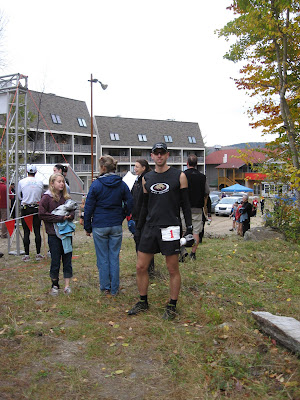 I was feeling good about this race, after a summer of fairly disappointing race performances due to my lack of ability to cope with warmer humid weather I was really looking forward to racing in cooler temperatures. I’ve learned that 30-50 degrees is my optimum racing temperature range and that’s just what we got on race day. I had also done a fair amount of mountain running/hiking this summer, and plenty of hilly trail and road runs that had me feeling confident about this race with about 3,800′ elevation gain (and equal descent) over 12 miles. 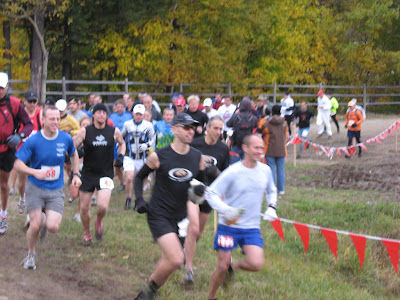 My race strategy was to go out hard and keep pushing hard the whole way. Not too different than my usual approach to racing, except this time I actually thought I had a better chance of pulling it off without burning out near the end. Given my recent long training runs there certainly wasn’t any reason to burn out in a 2-3 hour race. It also helped that I was just about the only person racing who knew the course. I set off fast and was surprised to find myself leading the way with Stephen for the first quarter mile. It wasn’t long though before we hit the really steep climbing and the really strong mountain runners picked me off as we made our way up about 1500′ in the first 2 miles. I knew that I had no right to be leading this race so I really didn’t mind giving up those places early on, I just hoped that after we reached the top of the first peak I wouldn’t lose any more.

Chuck was one of the runners who passed on the way up, and I knew that once we got to the long downhill stretch he’d pull away from me so I tried hard to keep close to him. Chuck credits years of downhill skiing for his amazing ability to run fast downhill, I guess when you stop being afraid of killing yourself going down a mountain it really allows for some fast running. Of course it helps having the strength to back it up.

From White Cap it there wasn’t much up or down as we summited Locke and Barker peaks, but there was some nice rocky trail and single track. From Barker there was a good steady drop down to North Peak along dirt access road, a short stretch of Scottish looking hillside and then more fast running down dirt road to the base of Jordan Bowl. 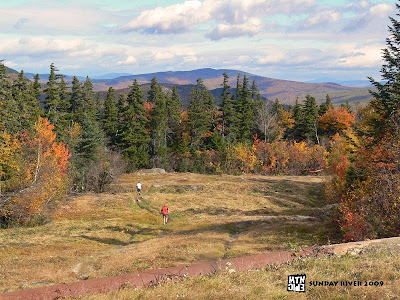 Around mile 5 I caught up to Chuck and Stephen, who had gotten away from me on the downhill, now that we were starting our second long climb of the race. James also caught up to us, as well as Billy whom I had met at Bradbury this summer (or did we catch up to him?). The five of us stuck together, more or less, moving up the hill like an accordion, spreading out and then bunching up again. I don’t think anyone was modifying their pace for the sake of staying together but as soon as someone fell back a bit there was always the motivation to push the pace enough to avoid getting left behind.

This second climb was easier than the first, covering only about 1000′ in two miles to the summit of Spruce Peak, then an easy run on single track to Aurora Peak. We dropped down a little bit and then made a very steep climb up 400′ more to the summit of Oz which is the highest point on the course, a little over 3,100′. As we approached the summit of Oz we were passed by another runner coming towards us who had already tagged the turnaround point on this short out-and-back stretch. I hadn’t seen him since he passed me early on in the first climb but it looked like we were making up ground on him and I hoped we’d be able to catch him on the long downhill that was coming up. The course took a little dip down, then another very short climb to the final peak of the race Jordan Bowl. 4 more miles to go, 2100′ all downhill.

The first 1.5 miles of this descent drop 1300′ with an average grade of about 16%. I’ve decided this is just a little bit too steep to run comfortably for the amount of time it took. But races aren’t about being comfortable, so I let gravity do it’s thing and tried to keep my legs turning over as fast as I possibly could. Chuck and Stephen quickly pulled away from me and James passed me somewhere near the bottom of this crazy slope. I kept them in my sights and as the dirt road leveled out I began to close back in on them. It felt like I’d dislodged a kidney and perhaps a few other internal organs but my legs were holding up reasonably well to all the pounding. 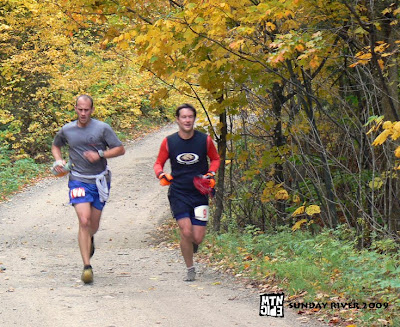 Most of the last two miles of this race (all three of the races in fact) are on tight single track trails with plenty of tight turns and bumps and a few muddy patches. Based on all the running I’ve been doing at Bradbury this year I figured this kind of stuff ought to be my strength so I went to work catching back up to James, Stephen and Chuck. Many of the slower 4 mile runners were still on this stretch of trail (they had started an hour after us) which made for an additional challenge trying to get around them. I did end up passing James and Stephen but once we left the wooded single track for the final push on easier trail the order changed again, but we did stick pretty close together. Since none of the others knew exactly how close to the finish we were I instructed the other Trail Monsters to “put the hammer down” when I knew we were about 1/4 mile from the finish.

Of course this race wasn’t going to end in an all out sprint, we had to negotiate the obstacle course of the Wife Carrying Championship before reaching the finish line and we all knew that we would be judged on our performance, not just our speed. I hit the log hurdle, planted my hands and did a sideways cartwheel, ran up to the edge of the mud pit and did a somersault flip into the waist deep water, dove over the sand pile and did a barrel roll landing and somehow managed to get back on my feet just in time to cross the finish line. What a brilliant way to end a race! 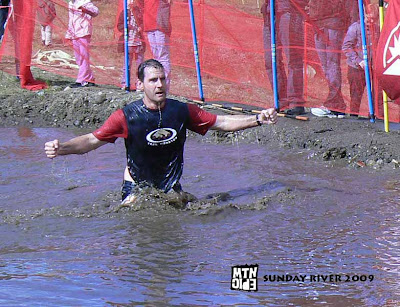 I ended up finishing in 2 hours 3 minutes, coming in 10th place overall. I actually think that this was my best race of the year. I ran hard, felt good, had good company, and turned out a time that I was really happy with. I couldn’t ask for anything more.

Oh yeah, Emma finished first place female in the 4 mile race so that was pretty sweet too! 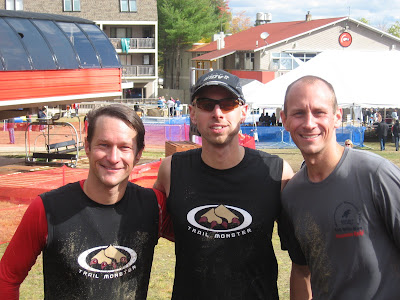