I’ve owned the Garmin Forerunner 410 for nearly a month now. As of this posting, I’ve run with it close to two dozen times and have gained a bit more insight since I last wrote an initial impressions review several weeks ago. I’ve been getting quite a few requests to do a more in depth review and I’m happy to share my thoughts, so here they are:

Running with Garmins – A Brief History 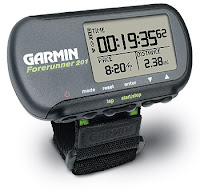 Several years ago I owned the uber-blocky Foreunner 201 that was a bit like running with a TV remote control strapped to your wrist. It was bulky and uncomfortable, but it was so nice knowing my distance and pace when out running… at least when it worked. Maintaining a satellite lock was often a problem with this model especially when trail running, but since not many other options were available at the time, most of us were forced to live with it. 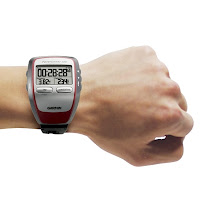 Then the 205/305 series came out and I purchased the 305. Compared to the 201, it was much more ergonomic and also performed a bazillion times better. It acquired satellites no problem through heavy tree cover, which was a godsend for us trail runners.

I really liked the 305. It was more comfortable, accurate, easier to customize and easier to use than the 201. However, about 18 months in, mine kicked the bucket. Given the price I paid at the time, I was not happy. However, for a little less than $100, Garmin exchanged my broken one for a factory refurbished one and it performed well for another 18 months. At that point, it slowly started to fade, and finally, early this autumn it died. RIP little Garmin. I was happy with your service, but not your short life span.

Enter the 410
During my three and a half year stint with using the 305, Garmin released several other running GPS models, including the 405. It promised the same stellar GPS locking performance as the 305, but was smaller, sleeker and featured a nifty new bezel design that turned out to be not-so-nifty according to reports from many users. Apparently when the watch is wet with sweat and/or rain, or your fingertips are wet, the bezel reportedly doesn’t work well, if at all, for many people. I thought that was a bummer since I liked the design. It actually looked like a watch as opposed to some ginormous science fiction gadget, which was appealing.

So, when word came out that Garmin was releasing the 410, essentially an upgraded version of the 405, I was intrigued. They apparently licked the bezel issue. There’s also a few other differences, such as you can completely power down the 410 and apparently you couldn’t with the 405, but apparently not too much else of great significance.

So with the timing of my 305 dying and the new release of the 410, I decided to give it a shot. Overall, I’m very happy with it, but I do have a few criticisms.

Performance and Displays
The 410 locks on to satellites quickly and with no problems and performs just as well as the 305 on that front. I’ve been in heavy tree and cloud cover quite a bit with it and haven’t had any issues yet. 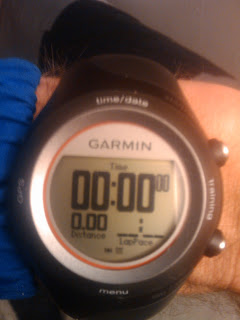 The displays are also nice. You can have three data fields at a time on the screen and they’re easy to read while on the run. That’s one less piece of data than the 205/305, but with the 410 there’s the added benefit of the auto-scroll feature which alternates between screens with different data fields (more than 30 to choose from) and you can control how fast it does it (slow, medium, fast.. I’ve found the medium speed to be perfect).

You can have multiple data screens for the auto-scroll, but I’ve found that two is enough. I thought the auto-scroll might be annoying at first, but not the case. It’s nice having all of that data displayed while I run and I find it very beneficial. On one, I have the running time, distance and lap pace (I also have it set to automatically take a lap each mile). On the other, I have it show a heart rate zone graph, current heart rate, and average heart rate. Given there are dozens of data fields, the possibilities of combinations are pretty darn numerous so most folks should be pretty satisfied.

The Bezel
While I don’t mind the bezel that much, it does seem a bit gimmicky. In case you’re not sure what the bezel is about, it’s a touch sensitive outer ring that you either tap or scroll your finger around in a circular motion (think older school Apple iPod) for certain features. 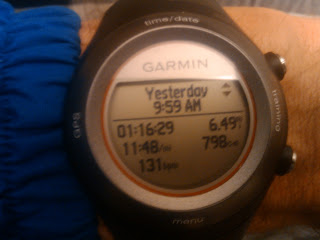 However, I don’t see what the problem is with just having buttons. Granted, there are two on the 410, which are used in conjunction with the bezel when setting up features and the buttons are also used for start/stop (top button) and lap/reset (bottom) when training, but the bezel is used for almost everything else. I’ve gotten a lot more used to it, but it’s still a bit cumbersome and frustrating to use at times, but overall it’s okay and I don’t think much about it anymore.

I’ve never used a 405, so can’t speak to the moisture issue with bezel sensitivity with that model, but I’ve run quite a few times with my 410 now in the rain or with sweaty hands and the bezel performance was fine. No problems at all with that. 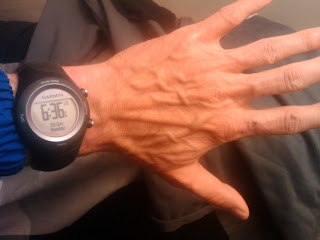 I never had issues of comfort with the 305, and I definitely don’t with the 410 either. But a big bonus I like is that I can wear it with the GPS off and it serves as a wrist watch, allowing me to wear it at work rather than toss it in my gym bag. Because of it’s smaller size, it actually looks a lot like a normal wrist watch and doesn’t draw the curious inquiries from non-runners as much which is nice (unless you’re “that guy” and maybe you want the extra attention).

Additionally, the 410 will automatically go into power save mode (aka GPS off) after several minutes of inactivity if the watch is stopped. You can turn that off if you want to, but I like to leave it on and it gives you warning when 30 seconds away from power save mode, which can easily be canceled by hitting the start/stop button.

Battery life? It’s listed at eight hours with the GPS on (two weeks with it off) but apparently it’s really around seven hours on a good day, according to other reports. That’s fine by me, as during ultras or mountain runs I usually go by just a stopwatch anyway. Sure, it’d be nice to have the wicked long battery life of the 310XT, but it’s something I can live without and seven hours is plenty for the bulk of my training and speedier races of marathon distance or shorter when I need to know mile split times. For ultras and mountain runs I don’t.

Premium Heart Rate Strap
Ah, one of the bigger gripes here. Static electricity in clothing REALLY affects this thing big time and will totally screw up your data. Wetting down both sides of the strap liberally really helps though. Since I’ve been doing that I really haven’t had any problems. But wetting it down especially in the colder, dryer weather every time does kind of suck. Never had that issue with the older style heart rate strap.

Post Run Data
The ANT stick is pretty nifty. It’s a little smaller than most modern day thumb drives and plugs into the USB port of your MAC or PC (it’s compatible with both). What this thing does is wirelessly transfer the data from the 410 to your computer, so no wires are used and you can leave the watch on your wrist. It’s just a bit more convenient and works very well.

Once the data is transfered, you can upload it to Garmin Connect, RunningAhead, DailyMile, or whatever other online (or offline) training log you use. It works very easily and seamlessly.

Summary
Overall, a great running tool that is incredibly useful and I’m happy with it. Even if the bezel on the 410 is better in moisture than the 405, I still find it a bit quirky to use, but it’s far from a deal breaker. It performs great and the smaller, sleeker design is also welcome. The customizability of features will allow users to cater the 410 to their liking and it’s pretty easy to do so. If I were to give it a grade, it’d be a B+ or an A-.

Cons:
– Premium heart rate strap goes wonky with static electricity
– Bezel still a bit quirky, even if not affected by moisture
– Relatively short battery life (listed at 8 hours, in reality it’s 7 on a good day according to others).

I hope that answers some questions and helps some of you in doing some research before buying. If you have any questions, please don’t hesitate to ask. I’ll be happy to answer what I can.