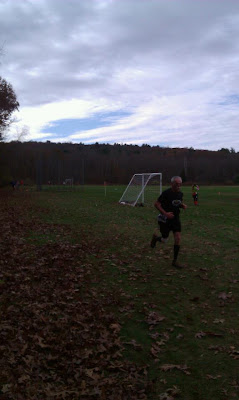 Two weeks ago I ran the Bradbury Ultra 50k, at the time I labeled it in my mind as the “good, bad and ugly” The good was my first 15 mile loop which was amazing, the bad was my second 15 mile loop and by bad I mean real bad. The ugly was the fact that I planned a 50 mile race just two weeks later and the injury I sustained running BBU, would surely kill my dream of running a 50 miler this year.

I thought I might have tweaked my right knee but after researching a bit, I am sure it is an ITB overuse injury. Basically running the 50K while not being very well prepared for the distance. I took it easy for six days and then tried a fairly easy trail run. The first three miles of the run was business as usual, but the last two I was reduced to mostly a walk.

A very discouraging result only seven days before Stone Cat. My first thought was to abort the whole idea as there was no way I would make the cut off walking the whole way and honestly after walking most of the last five miles of the BBU,I didn’t cherish the idea of walking a fifty miler. I decided that I didn’t want to give up on Stone Cat and began a regimen of stretching with the intent of trying to run the Marathon.

As days ticked by, my knee felt better (though I didn’t try running on it) and I began fantasizing that perhaps I could make a go of it. Of course the reality is that if the ITB acted up on the 50K and it has only been two weeks since the BBU,Then six days later I couldn’t run 5 miles so surely I couldn’t expect to run fifty. I almost stepped down to the marathon but then decided if I was going to DNF, it might as well be while attempting the big race.

In my warped sense of rationalizing, I decided that just maybe I could pull off the 37.5 because there was no cut off for that. I just wanted to end this season on a high note. So, I taped up the knee, toed the line with the fifty milers and hoped for the best. I was prepared to accept what ever fate was coming.

I actually felt pretty good heading out into the dark and was surprised how good the knee felt. I also seemed to have no rust issues even though I basically didn’t run for two weeks, except that one ill fated attempt.

For six miles I felt great, until the knee pain started coming back….slowly at first but stronger as each mile passed. My new plan was to just get through this lap and then quit. I forced myself to push  back the urge to walk and just keep the legs moving. My cardio and my fueling were perfect and the rest of the body felt great. It was discouraging to be so sure I could finish this fifty miler if it weren’t for the knee.

Knowing that it would be just this one lap, I decided to at least make a race of it and try to beat my first loop time from last year. I started pushing the pace everywhere I could and found myself passing many other runners. I found the pain was no worse when running faster so I kept going. I finished the first loop much faster than last year at 2:14:12 and decided I would attempt another lap. I figured if the pain level stayed pretty much the same I should be able to go another 12 miles.

I stopped at Ryan’s aid station and stuffed down a couple pieces of bacon……so good. I think Ryan was worried that I would just settle in for a great breakfast of pancakes and bacon, then ultimately abort running all together because he started shoeing me away. He told to get out there and get running ….as I think back, he was pretty helpful as I probably needed a little prodding at the time.

The first three miles of the second lap went well and the knee seemed to settle into a dull but sustainable ache. Then on one of the down hills the band really acted up and I lost stability in the knee. It was an odd feeling and it surprised me. I became worried that I might do some real damage if I kept running this way.

I started running the downhills with a stiff right leg which worked fairly well until I got a cramp in the right quad so bad that I had to stop for a while and message it. I suspect it was caused by the stiff legged running so I change my strategy to fast hiking the downhills and powering up the inclines to make up for the time loss.

Other runners must have thought it was very strange to pass me on the downhills only to have me scream by them on the ups. I am sure they thought I had no idea how to run pace. Around mile eight I suddenly had pain in my left knee, same place as the right on the outside near the cap…….I am thinking I was probably compensating with my left leg. Now I had serious pain in both knees which was throbbing even when power walking the downs.

This is when I realized that two or even one more loop was out of the question. I spent the next mile feeling sorry for myself until I realized how far ahead I was of my marathon time last year. The director told me I could step down if I wanted and my thoughts drifted to a PR for the marathon. What a great way to finish out the year, if I could PR then all would not be lost.

This new decision put a little more bounce in my step but I could feel the fatigue of the faster pace settling in. I also wasn’t sure they would allow me to tack on the extra 1.2 miles and get an official time. I crossed the line then asked if I could run the extra for the marathon. They said no problem and directed me to the marathon first 1.2 loop.

As I ran by Ryan, he looked pretty excited thinking I was heading out for my third loop. I let him know I was only doing the Marathon …. he cheered me on anyway.

The last 1.2 was extremely painful and all I wanted to do was cross that line and stop moving. I finished with an unofficial time of 4:48:20, over an hour faster than last year (6:11:37). As I take an overview of the last 8 weeks, I think about The Brad, how it prepared me for this PR and the things I can change to do a better job next year.