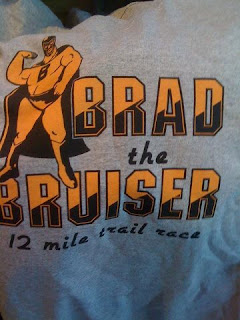 All the races leading up to the Bruiser this year were important and memorable, and even though I have a couple big races still planned, the Bruiser was my “state meet” as far as trail racing is concerned.

In training, my fastest unofficial time was 2:10:00 which was 7 minutes faster than my PR on this course. I worried that the 2:10 was maybe a fluke, or I missed part of the course, or perhaps I peaked too soon…..on top if that, the course was changed because of the missing bridge.

I wish I could say that I did all the right things in the two days leading up to this race, but somehow I didn’t. Saturday I worked at my sons house hand shoveling, setting cement blocks, ripping out old walls and constructing new ones. I started at 5:30 am and didn’t quit until 7:30 pm.

I ate way too much pizza and junk, sweat all day without re hydrating enough and then after we finished, we went out for supper and drinks and more drinks. I went to bed way too late then woke up tired and lame on race day. I also felt the beginning of a sore throat. OK…..so not a good scenario for a race day PR.

I was up plenty early so I took a morning swim in hopes of limbering up the muscles a bit then headed to Bradbury. On the way I rationalized by reminding myself I merely needed to beat 2:17:00 to PR and I should be able to do that regardless.

I decided I would stick to my race plan and see how things fell into place. If I crash and burn…..well I put myself in this position. After Ian reminded everyone how much fun we were going to have, the race was on.

I positioned myself pretty close to the front at a place that I would be forced to push a bit for the first two miles. This worked out real well and I actually felt pretty comfortable and strong.

My first mile was 8:38 pace which was quite fast for me on these trails. I come out of the Island trail about a minute faster than any training run. I felt good and was not being passed by many runners.

I was in full race mode and even though it was too early in the race to know such things, I was confident that I could race the first tens miles according to plan. The O trail would just be a careful jog to the finish. I had no doubt that I could beat 2:17

The first five miles ticked by and I was enjoying the ride. The trails seemed tranquil today as there are days they are surely hateful and do everything they can to trip a runner up.

It was as if the rocks, roots and obstructions moved to allow me good foot placement. There were a few runners that that came up behind me who were obviously running much faster than me and I graciously moved to let them by. But this was a race and because of being in race mode, all others were required to earn a pass as I had to earn most of the places I gained.

I figured mile five would be about the time I would realize the extent of any type of crash and burn because that is about when I usually settle in and get my second wind.

Five came and went without me realizing how I felt, I was playing leap frog with a gal wearing vibrams. It was amazing to watch her foot placement. She was so graceful and seemed capable of placing her feet in all the right places.

In mile six we rounded the corner and headed up the snowmobile hill trail. This hill seems to last forever and I suspected it would be my chance to gain a little ground on this gal as I felt I was stronger on the hills. Almost 2/3rd the way up and we were still side by side in our friendly duel. I knew there was not much hill left so I surged and started leaving her behind.

My plan at the water stops was to eat a gel, wash it down with water and keep my lost time down to about 40 seconds. Instead I felt rushed and aborted the gels for a drink of Gatorade and a douse of water on my head which took in the range of 30 seconds.

When I reached the second aid station I lost all I had gained on the vibram gal because she took a splash and go while I was sucking down the Gatorade. I almost took off to chase her then reminded myself I should be running my own race. I finished the drink doused my head as usual and hit the trail ……never to see vibram girl again.

Miles eight and nine, I ran on screech mode trying to push the pace as hard as I could. I needed to hit the head of the O trail no later than 1:40 but preferably at 1:35. I liked the fact that I felt in control and was still running strong. In my mind I played with the idea of blowing off the last aid station but knew It would be a bad idea as I needed all the energy I could muster up to try and master the O-trail tired.

I found myself really liking the new trail as it seemed to prep me for the mindset of the O. I reached the final aid station at 1:32:50. Wow ….over three minutes faster than my best!

I usually run the O-trail a conservative 35 minutes but have run it as fast as 30 minutes. I didn’t expect the 30 but felt a sigh of relief knowing that my easy 35 minute pace of the O would still earn me a PR under 2:10.

I started easy and payed close attention to my foot placement. I hadn’t gone down yet today and I didn’t want some injury derailing my race. Then what I didn’t plan on happened…….I noticed some runners catching me and for some reason I couldn’t stay out of race mode…even though I knew I was going to PR and even though I knew racing the O trail always caused a few face plants before it was over and even though I have become so focused on the trail while racing it that I took a wrong turn.

All that meant nothing and I started speeding up, pushing hard when I could, trying to spread the gap with the runner behind me. I was refusing to be passed by anyone. I was full out racing the O trail and it was working.

About halfway through, I could feel the fatigue of the race catching up with me, my legs felt heavy and I caught a few rocks and roots but was able to stay upright……that is until I suddenly found myself flying through the air. I went down hard and landed on the elbows and knees. Lucky for me it was a very soft area and except for a lot of black dirt all over me, there were no injuries and no blood.

I hit so hard that my wrist pushed the Garmen into my arm and shut it off. I got up quick and brushed as much dirt off as I could. Now I not only lost time but I had no idea what my time was.

I was pissed, I had a plan and the most important part of it was to respect the O trail and run it conservatively. I took off and started sprinting…yes I was sprinting the Otrail and for some reason it seemed easy.

In no time I popped out of the woods and turned on the kick. The finish felt great and for some reason the time didn’t really mean that much to me. I guess it was because I gave it all I had and when you do that, there is nothing left to complain about.

I actually ended up with a great finishing time and a tough PR to beat next year. I only wish I could have stayed around longer to cheer others and and bask in my glory, but it was Grandparents day and the agenda was apple picking……Hmmnn does that qualify as a cool down?