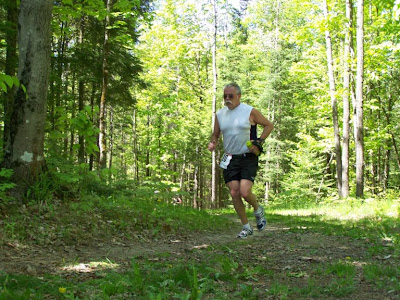 I planned my miles, I prepared the right fuels and drinks, I trained to the best of my knowledge. I tapered well and showed up itching to run.

The 25K didn’t start until 10:00 am but I showed up at 7:30. I wanted to watch the 50K group start out and cheer some runners on as I mentally prepped for my race. As I walked up to the start area, the music was the first thing I noticed. It was country/blue grass and the notes rang sharp but tranquil in the clear morning air.

There was a John Deer tractor hooked up to a hay trailer all set up and ready for the country entertainment. The whole area seemed very organized. Everything in it’s place, well marked and easy to understand. What a great job they have done here.

Within a few minutes, runners started showing up, stretching and warming up for the 50K. It is mind boggling to think of running 50K and especially 50 miles …..which had already started at 6 am. No, I would be happy enough to say I finished the 25K.

It seemed weird to watch such a slow start as I am used to watching shorter races where runners shoot out of the start area like their pants are on fire. It was cool to watch them ring a cow bell for the start.

I didn’t get nervous at all while waiting for my start which is unusual for me. I wondered to myself, is that a good or bad sign? Was I feeling confident or more likely preparing for the worst. Perhaps I was already resigned to a slow time. This course is constant up or down hills with twist and turns enough to play havoc with any one’s sense of direction.

I cheered on dozens of runners as I waited for my race to start. Some seemed so fresh and they had already run either 23.5 or 10 miles depending on which race they were running.

Finally the warning cow bell rang and we all scurried to the start line. There were at least 200 hundred people in this race and they were all ready to go. As the cow bell rang and we started out, it was so much different than the shorter races. We stayed in a pack as we hit the trail. It sounded like a herd of cows as they were lead to pasture. The dust rolled up into the air as our “herd” rounded the first corner.

The cloud dust made breathing a little difficult and I found the pace too slow. I worked the edges to pass and get my speed up a bit. The hard part was to watch the ground as there were many rocks and crevasses on the edge of the trail. My main concern early in the race was to not twist an ankle (which I did numerous times when training here) A severely twisted ankle is the one thing that could cause a DNF. I have never had one yet and I didn’t want this to be the first time.

My plan was to forget about mile pace as it is not an accurate means of monitoring effort in a hilly trail race. Instead I planned on keeping my heart rate between 140 and 150 for the first 5 miles then picking the pace up a little in the next 5 to 155-160 and if all goes well push 160-165 for the remainder.

Mile 7 and 8 were great! I picked up the pace to 9:22 and 9:58 and still not reaching 160 as a peak. I felt very good and thought I had this race licked. I was running strong, my plan was working perfectly and I knew a good start like this one would help me weather the heavier terrain to come.

Mile 9 I dropped to 12:15 but picked right back up to 10:54 on the 10th. I came out of the woods and ran past the start/ finish line feeling good. My energy peaked a bit as I picked up to an easy sprint and passed Don P taking photos. I felt I would look pretty good for the picture and waved as I passed.

I was a little surprised as I crossed the street to do the 5.5 mile loop to finish. My hamstring had not bothered me at all and besides a little cramping in my right quad, I felt 5 miles would be no problem. I was prepared to walk a couple hills if I had to to maintain my HR and felt it would not affect my mile time as long as I picked it up on the downs. My estimated pace for the whole race was 10-11 minutes and right now I felt I would surely be much closer to 10 maybe even in the high nines.

I crossed the field and stopped at the water station. I decided drink a water and a Gatorade just to be sure I didn’t bonk. Mile 11 and I dropped down to 10:02 pace with my HR staying the same. For sure I was working on negative splits and could almost imagine every one’s face as I sprinted across that finish line.

Mile 12 something odd happened, my right lower quad stiffened up and cramped. This caused my right calf to cramp and I Struggled to maintain pace. I was on a downhill at the time and walked the next hill. Once I got to the top, I stopped and stretched out the legs. The only time I ever cramped in the quads was during my Marathon run.
I surely did not want to go through that again. I can run through pain but when a quad cramps, it stops your legs from moving. This had me worried but I still managed 11:28 pace. I could tell I was not running to my ability though as my HR dropped to an average 142 and a peak of only 150.

13 and 14 were more of the same except my left quad was acting up too. I continued to stop an stretch them out and kept passing the same runners over and over again as I worked through the pain. I felt I could hang on this way to the end but at the same time was disappointed as I was not running the speed I should be able to. I was happy to pull off an 11:13 and 11:35 for those two miles. My average Heart rate only running around 145.

Mile 15 is when the bottom dropped out of my race. I should have been ecstatic as a mile is usually nothing but in this case a mile was forever. Both quads and both Calv’s were stiff and aching. It was a chore just to walk never mind running. I don’t know how many people passed me. That was discouraging and the only comfort was that I was not alone. There were a few others struggling like me. Not that I wished for others to
struggle but a person likes to be able to blame something else for their problems. This allowed me to assume the toughness of the course was to blame and not my training or decisions during the race….just human nature I guess.

I spent most of mile 15 stumbling more than running. Sort of like a shuffle step and just trying to put one foot in front of the other. I scanned my brain for answers…What did I do wrong? Not enough E-caps? The wrong fluids? Improper training? All much easier to answer if I done this type of race before. This is going to take some studying to figure out what went wrong. Mile 15 was only 13:45 pace and 139 average Heart rate.

Finally I hit the road and decided to force myself to start my sprint as it was only 300 yards or so to the finish. As I crossed the road my leg muscles cramped all at the same time and I almost fell on my face. This is the first time during the race that I actually thought I would not finish. Perhaps I could find it in me to crawl across the finish line.

I leaned up against a tree on the side of the road and stretched out my Calv’s, then my quads. I did this twice for each then just took off running. I didn’t even think about it, I just did it and somehow I kept going and actually had a pretty good kick (considering) crossing that finish line. It felt so good to stop and stretch.

My next thought was to get that free beer! After this much struggle I couldn’t leave without drinking that beer. I don’t know what went wrong but I must say this was a great race. I am so glad I entered it and take my hat off to these 50K and 50 mile runners. Also, the whole event was so well organized. I don’t know all the people involved but high fives to Eric and Ian ……well done! I am sure this race will become more and more popular as the years pass.

My finishing time was about 2:45:00 so my pace was still respectable at 10:30. It could have been much worse, lucky for me that I did well in the beginning to counter act the last few miles. Next year I will either try and better my time or possible even run the 50K ….who knows?