DNF. I do not like these three letters. And I really do not like that they are now next to my name when it comes to this year’s Pineland Farms Trail Challenge 50k. I was intending to cross the finish line in triumph, not come riding up to it on one of those golf carts that zoom around the course that pick up injured runners, and I especially did not intend to finish feeling depleted, sad and upset and only having run 22 of the 31 miles. But such things happen in life, and Sunday just wasn’t my day.

But before I say anymore, I have to say a HUGE thank you to my parents, who not only came over to our place at 6:30am to watch Sam so we could go to Pineland together, but who also came with her to the race, hugged me when I came walking in from the sideline and told me they were proud of me not matter what, and who helped immensely by keeping Sam entertained and fed while Ryan and I both sat in our tent, trying to feel human again. We could not have done it without them! Also, a big thank you to Erik and Ian, and all the volunteers, for putting on such a great race! As always, things were well-run, fun and we all enjoyed the festive race atmosphere.
The morning started out with me wondering where in the world I was going to pump before the race. The YMCA was closed, which I hadn’t anticipated and I needed an electrical outlet for the pump. I was getting a bit frantic, as I already knew I’d be going a long time without nursing/pumping and had expected to be able to pump right before the race. Jim realized I was getting upset, and told me he’d get me what I needed. What a great guy, and a nice friend! He walked over to Erik and told him I needed a private place with an outlet. Erik looked at us like we were crazy (private? you mean now? and here?), but told us I could use the outlet over by the refrigerator. There were people everywhere, but Jim set up the chair for me, and Ryan took over, covering me with a towel while I pumped. I’m sure we got some funny looks, but it worked, so whatever!
After that and a quick run to the port-a-potties, it was race time! 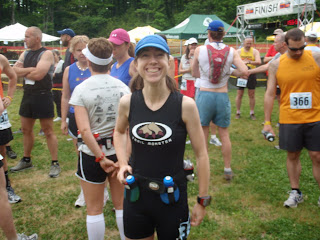 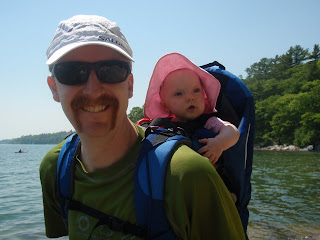 Ryan and Sam down by the water (notice Ryan’s lovely facial hair!) 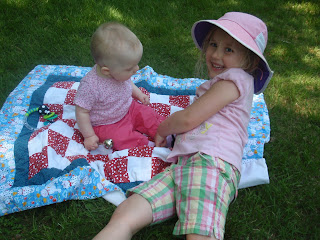