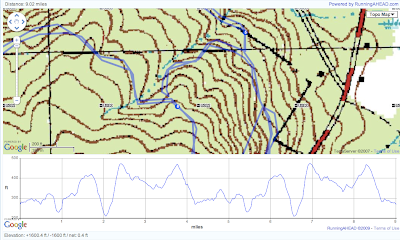 My penalty loop. The little bump before mile five in the elevation profile was the off-course section.
Because of the many flaws in a 7 day/week, 365.4 days/year calendar system, the Beach to Beacon and Bradbury Mountain Breaker fell on the Saturday and Sunday of the same weekend this year, so several of us had to double up and run the B2B2BB or Quad B. The Beach to Beacon report is here.
The beautiful Maine summer weather we had Saturday continued into Sunday. It was a nice break from the record warm Spring and Summer we’ve been having (hottest March and April, second hottest May, June, and July).
This race was an important Trail Monster Running event because Acidotic Racing came out of the woodwork of the tarpaper shacks they inhabit in NH (anyone ever read “”? It’s bloody hilarious). Bragging and Beer were on the line.
I wasn’t expecting a fast race because of my 10K the day before. But I felt surprisingly fresh and started passing people after a moderate-paced start. This included sailing past Chris Dunn, guru of acid-and-pothead racing. Dunn smoked me at Pineland 2009 and Exeter trail races, but was pwned at Pineland 2010 and Mt. Washington. James Demer was impatient with the pace and passed David Roberts and I on the rolling part of the Boundary Trail before it starts climbing. Demer is a fearless downhiller, so I was surprised that we caught back up to him near the bottom of the go-as-fast-as-you-dare South Ridge trail. I mostly ran the summit trail but walked the steepest bits, especially near the top. Peter Keeney was running the whole thing and passed me but at the top he was only a step ahead and my walk and his run were effectively the same pace. We also closed in on Adam Zukowski and Steve Wolfe at the top. Sweet. Just before the crest, I started running again, passed Keeney and took-off, feeling pretty good about my strategy. I seemed to have dropped Keeney, Demer, and Roberts and was now running in Wolfe’s wake and he was unaware of me. Perfect. Wolfe is an Acid-robotic racer who smoked me at Pineland but I pwned him at Mt. Washington. So I had a strategy now. Stealthily stay in his wake until either the 2nd climb up the Summit Trail, or even the Northern Loop trail, then run as fast as I can and see if I can hold him off to the finish. Unfortunately, this strategy failed spectacularly for two reasons:
1) at the top of the Northern loop climb (the 2nd and much, much easier ascent of the summit), Dora yelled out something like “go Jeff”. Very sweet of her but I was outed and easily noticed on the switchbacks. I noticed Wolfe pick up the pace – he’s a wily racer, no doubt. So I needed to alter my strategy. Hang back and let him think he dropped me. He was running fast so running slower was an easy strategy!
2) I had the 2nd run through the Northern Loop all by myself. Wolfe and Zukowski were maybe 50 yards ahead and no-one was in sight behind me. I’m not sure what I was daydreaming about but at one point I noticed that I a) no longer saw Wolfe and Zukowski on the straighter sections and b) didn’t recognize what trail I was on. b, at least, didn’t surprise me since I rarely run these trails and hadn’t run the Breaker course since last year. So I kept running. But the climb was getting steeper and I realized I was climbing the mountain again but I was hesitant to turn around. Then I reached orange flags crossing the trail I was on. Oops. I turned and ran back downhill and reached the Boundary Trail turnoff just as Phil Dirusso was making the right hand turn. How many people had passed me? I saw one runner in front. This turned out to be Bob Poirier. It took some time but I caught and passed Bob. I ran hard down the South Ridge trail. The second climb up the Summit Trail was much, much tougher. I walked much more of it. I took off on Tote Road but had no clue about my relative pace. No sight of anyone in front of me and no one was closing in on my behind. I tried to run hard up the last climb – It’s a perfect grade for fast hill climbing. And I ran hard down the Terrace Trail. At the hairpin turn back onto Northern Loop – the final flat stretch to the finish – I met Keeney coming from the wrong direction, I guess he had taken a left at this turn (or more correctly, gone straight) and had turned around. I outraced him to the end and crossed in 1:13:32.
Shit, there’s Dunn with a smirk on his face. Did he just finish? No, he finished 20s ahead. Demer and Roberts finished about 1:15 ahead. Bowdoin Nordic coach Nathan Alsobrook finished 2:41 ahead. Wolfe, Zukowski and TM Andy Kiburis finished about 4:15 ahead. Shit – had I lost 4:15? No, the good (or bad in this case) thing about wearing a Garmin is I can go into the file and look at the time stamp from when I left and re-entered the course. I only lost 2:45. So Wolfe/Zukowski dropped me by 1:30 over the last lap.
Acrid-despotic racing finished 1st in the team race and my 2:45 diversion wouldn’t have made any difference (but would 4:15?). The team competition this running season has been great. Lots of Trail Monsters had great races – especially the many lady Trail Monsters. Ian and Ryan did another terrific job directing the race. Apres-race beer and food at Gritty’s was most excellent. After two days of racing, the quads are in revolt today. Looking forward to the Bruiser.